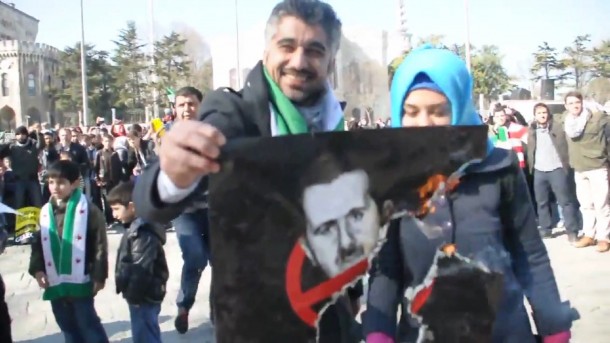 The term of “The Arab Spring”, often used, but rarely defined, is given some human background by Greg Barker (MANHUNT) whose real life stories from Libya, Syria and Bahrain show the high cost of resistance amidst a stalling of the progressive movements. The raw footage is intercut with animated visuals about every modern revolution – whilst it gives a necessary background to the present proceedings, it somehow does not feel right because its slickness belongs to another world.
Osama ben-Sadik, who had homes In Virginia and Benghazi, lost his son Muhannad in the bloody fighting which toppled Muammar Gadafi in Libya. Osama recollects his ambivalent feelings about his son joining the armed struggle: “As a father, I would say, come home to Virginia, son, but as a man I had to support his struggle”. Nevertheless, Osma asked his son to return home, but Muhannad’s answer was the one of a very young man, short and simple: “If everyone leaves, who will fight for the revolution?” Whilst the media is usually full of horror stories about “seemingly innocent young men from middle-class backgrounds in the West turning into killing machines in the desert”, Muhannad, a boy scout in Virginia, is an example of a young Arab following his ideals to the bitter end. But when we see his father Osama at his grave, we tend to feel that the high price Muhannad (and his father) paid is just too much.

With the emergence of ISIS in Syria, the civil war has taken a new turn: opponents of president Bashar al-Assad find themselves in the middle between the hated regime, which stills kills mercilessly, and fundamentalist sections, whose aim and methods are no less violent than the ones of the Assad regime. Peace activists Motaz Murad and Ghassan Yassin would prefer a continuation of their “Flower movement”, but they have to admit, that they have come to an dead end: The Regime is killing any protesters, armed or not. The two rather sad men will have to make up their minds soon: will they take up arms and fight, or be killed protesting peacefully?

When his daughters Zaineb and Maryam were young, the human rights activist Abdulhadi al-Khawaja, who had to flee from Bahrain to Copenhagen with his family, told them a symbolic story: “We, the people, are the giant, and the little creatures who torture us, are like ants. Why do we let them get away with it? ” Today, al-Khawaja is serving a life sentence for “terrorism” in Bahrain, whilst his daughter Zaineb, mother of a one-year old baby, is in prison. From Copenhagen, her sister Maryam is fighting for their freedom by informin authorities, particularly the American ones, about the plight of her family. But she knows that as long as the Fifth American Fleet is stationed in Bahrain, human rights infractions by the Sultan’s unelected regime will just be punished by a slap on the wrist by the US Government. Zaineb was present when his father was beaten up and deported and one fears for her daughter’s future, hoping that history might not repeat itself.

WE ARE THE GIANT is sobering: there is Osama’s sadness, which will never go away; Murad’s and Yassin’s shattered dream about following in Ghandi’s footsteps, and a horrible family history in Bahrain about to be repeated – whilst the US government looks the other way. To quote the Chinese author Ying Chang Compostine: “The revolution is not a dinner party – the Arab spring is drowning in its blood.” AS

ON GENERAL RELEASE FROM 14 November 2014