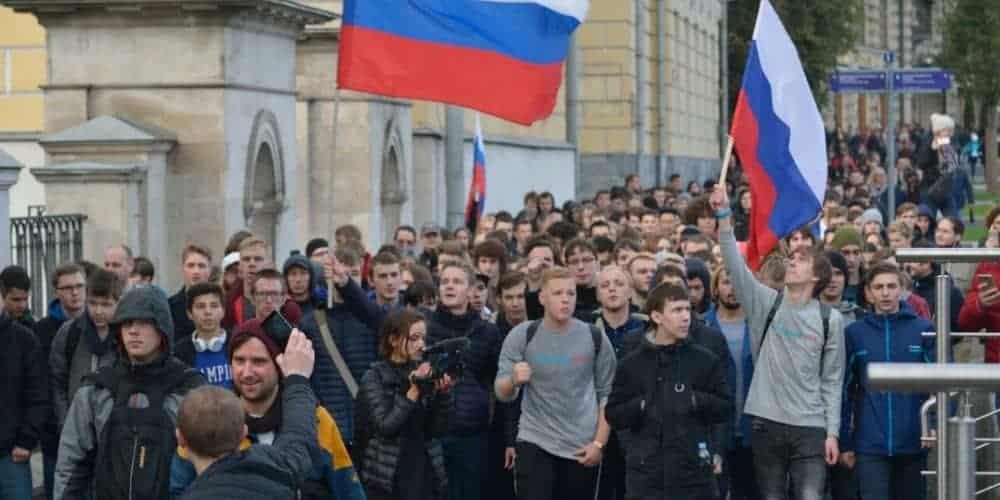 The first feature length documentary by Russian-French director/co-writer, DoP and co-editor Alexandra Dalsbaek, is a study of a Moscow student group, protesting against the re-election of President Putin in 2018. Very much shot ad-hoc, but still able to catch the arrest of opposition leader Navalny (twice), this feels very much like a work in progress, even though it is the long version, shown at the DOCNYC in 2021, sixteen minutes longer than he original version from 2019.

The action revolves around Milena K. almost playfully leading her group in anti-Putin and pro-Navalny activities. Milena poses with provocative placards in front of the Duma building and the Lubyanka – as well as other residences of state power. “Sell your villas, and build roads”, is one of her slogans attacking Putin and his oligarchs. But the resonance of the mostly elderly public is is anonymous and negative: “What have you even done for your country” is one of the answers that echoes back to Milena and her agitator friends. For the older generation Putin is still considered the saviour of Russia. Milena’s boutique owner mother is afraid for her daughter and tries to persuade her to limit her activism. Milena’s friend Alexander, who works in Navalny’s election office, is beaten up over night by the police, and fined 400 Roubles after a court hearing. Kostya S is arrested with Navalny in January 2019, after he was “disqualified” from standing in the election, and had called for a boycott of the state controlled proceedings. Whilst Navalny was eventually poisoned and re-arrested after his return from Germany, Kostya is sentenced to three year’s house arrest. But in the end, the ‘election’ goes ahead and Milena makes a final attempt to show the proceedings are rigged by walking into a polling station, and claiming rigged ballots: the voting cards are not counted and just stuffed into mailing bags. Finally, at a major demonstration, Milena is arrested, along with over 16 000 others, but released after 48 hours.

The narrative’s lack of structure is compensated for by its sheer  sheer panache. Milena could well be the alter ego of the director, enjoying the political fight and sweeping away the restrictions of the past . WE ARE RUSSIA begs the question, has Russian youth stopped demonstrating since Putin’s invasion of Ukraine. Looks like the state forces could well have cracked down on insurrection. While Navalny languishes  colony what has become of Milena and her cause. AS

WE ARE RUSSIA on July 15 will also be playing for a week at the Bertha DocHouse cinema.