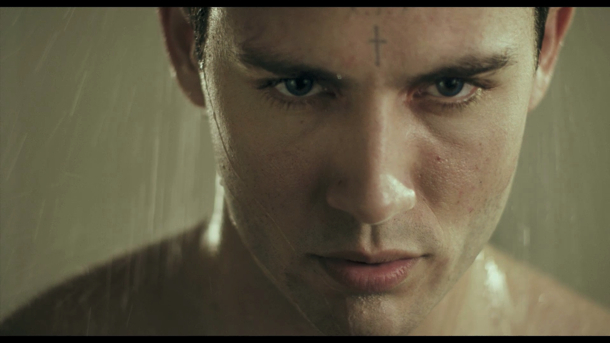 In the maximum security prison of Feltham Young Offenders, criminal Robert Stewart (Leeshon Alexander, who also wrote the script) shares a roomy cell with Zahid Mubarek (Aymen Hamdouchi), who is shortly to be released for petty crime, but is murdered by Stewart, hours away from his freedom.

Antony Petrou’s second feature is a slow-burning psychological affair with an incandescent glow to its prison interiors and a calmly sinister soundtrack that portends doom from the outset. Based on real events that took place in March 2000; Petrou skilfully conveys a climate of evil inside the institution, steered by Leeshon Alexander’s vehement imagining that fleshes out Stewart’s background of racial and parental hatred. The film flashes between the past and the present as a tandem narrative with Alexander’s voiceover, autobiographical-style, telling the story as he takes on both roles with increasing fervour (as a small child he’s played by newcomer, Niall Hayes).

Reflecting back on his childhood, Stewart’s alter ego explores episodes of his childhood where he was bullied at school, subjected to a diatribe of racial abuse from his father, failed to bond with his mother (we see him visiting a psychiatrist with her), all leading to incidents of self harm and mental anguish which culminate in his stalking an ex-girlfriend.   Through this construct he attempts to illustrate how prison confinement can actively breed negativity and hothouse a climate of violent racism, xenophobia and misogyny in inmates from difficult or dysfunctional families.

The idea is a good one, but the problem lies in the lack of drama between the central characters: whereas Alexander is portrayed as an unpleasant and unremittingly bitter man (which he may well be), Hamdouchi’s Mubarek comes across as affable and appealingly passive which makes it almost impossible for us to understand why he would become an object of hatred; let alone the victim of a vicious killing, when there has been no apparent animosity between these cellmates. There are no undertones of racial unrest and little to instill a climate of personal fear surrounding Mubarek. The officers in charge appear stern but certainly not hostile. And Mubarek’s personality remains un-explored throughout. So apart from Alexander’s strong performance there is hardly any convincing hostile interaction with the other inmates (compared to A Prophet or Starred Up for example) making it feel very much like a one-handed monologue by Stewart, who without doubt, has a deeply disturbed personality. So after a positive start, interest starts to wane with the repetitiveness of Stewart’s vilification and the lack of dramatic punch with the others, and more importantly, Mubarek himself. Simon Richards’ cinematography gives the film a stylish feel and the support cast perform well especially Gethin Anthony as the Officer in charge. The filmmakers certainly had brave and honourable intentions with WE ARE MONSTER, but ultimately this terrible tragedy deserves a more radical approach rather than this simplistic treatment. MT

Robert Stewart was given life for murder. In 2006, a public inquiry found this tragic murder could have been prevented.