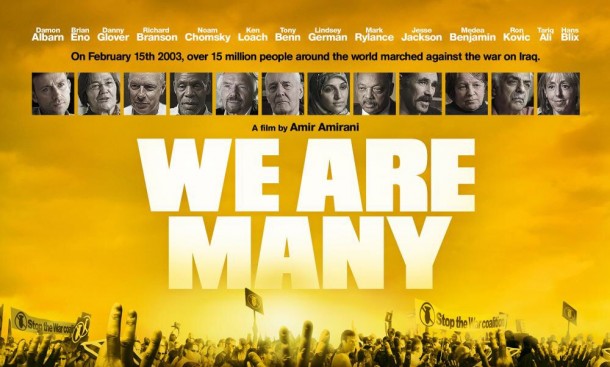 On February 15th 2003, between ten and thirty million people demonstrated in over 700 cities in more than sixty countries against the impending war on Iraq. WE ARE MANY is not only a document of resistance but also shows that whilst the worldwide protests could not deter the USA/UK Alliance from starting the war, it had consequences on other developments, particularly in Egypt and the UK itself.

Amirani (who had to re-mortgage his home twice to finance the documentary) mixes achieve footage with interviews: mainly from the art world, like Brian Emo, Damon Albarn, Danny Glover, Matk Rylance and Ken Loach, as well as campaigners like Richard Branson, Tony Benn and Noam Chomsky. They all speak about a race against time, because both the US and the UK governments were pressing for a war, before a second vote at the UN could be taken. The statements of Hans Blix, UN weapons inspector at the time, are particularly enlightening. Since we have learned, that his 2003 assessment of the lack of weapons of mass destruction in Iraq, was absolutely right, the charge of war crimes against Tony Blair and George W. Bush seems only logical. But it is not surprising, that neither of the two retired statesmen were willing to testify in front of the cameras. Colonel Lawrence Wilkinson, former Chief of Staff to Colin Powell, is more honest: “We lied to the American people; and I wish I had resigned”. In the last days before the outbreak of war on March 20th 2003, Richard Branson persuaded Nelson Mandela and Desmond Tutu to fly into Iraq, to convince Saddam Hussein, that he should leave the country, to avoid an attack, but US bombing raids thwarted this plan.

Not only the bloody war (which cost the life of 600 000 Iraqis), and its aftermath, which is still felt today, when nearly every week a new atrocity of the warring fractions in Iraq is shown in gruesome details on TV, has justified the campaign. Still, Amirani does not concentrate on the disappointment, but shows how the worldwide demonstrations encouraged the uprising in Egypt, culminating in the overthrow of the Mubarak regime in 2011. Organisers of these protests were surprised, that “whisky-drinking” people from the West were protesting against a war against an Arab country, whilst their own government did nothing. And on August 30th 2013, David Cameron was the first Prime Minister for 231 years, whose call for a war (against Syria) was defeated in parliament by 285 to 272 votes. Lessons have been learned, and the war is not forgotten: in the USA, Donald Rumsfeld, Secretary of State for Defence during the conflict, is continuously harassed by anti-war demonstrators, whenever he appears in public.

WE ARE MANY is always lively, avoids lecturing, and has a sense of humour, like showing the protests by US scientists on McMurdo Station in Antarctica, or the graffiti attack of the Sidney Opera house, the latter slapstick at its best. Perhaps the only critic is the absence of Iraqi voices, in an otherwise engaging and very professional documentary. AS

WE ARE MANY Satellite Q&A screening 21st May, out in cinemas 22nd May