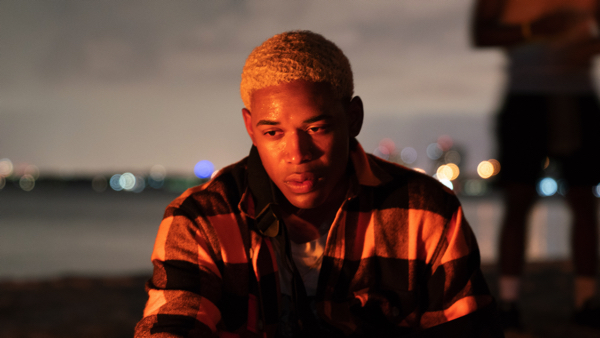 Trey Edward Shults shot to fame with his debut It comes at Night. His third feature is an overblown melodrama. Aiming for East of Eden and Rebel Without a Cause it is a film that rests on a  maximalist aesthetic to cover up for its emptiness, relying on the well worn love/forgiveness thematic. In other words, it is vacuous and dishonest, and the director’s self-importance is evident in the running time of over two hours.

Waves opens with High School teenager Tyler (Harrison jr.) being dealt a double blow: he is diagnosed with a muscle tear in his shoulder, ending his promising future in wrestling, and casting doubts on his university career. Then lover Alexis (Demie) decides not to terminate her pregnancy. Father Ronald (Brown), a sergeant major type, who tells his son ‘black people cannot afford to be average’ might be well-meaning but drives Tyler away. The South Florida mansion, once a status symbol for the family, becomes meaningless after Tyler kills Alexis during a school dance and is sentenced to life in prison. Stepmother Catherine (Goldsberry) blames her husband and gives his the cold shoulder. Timid daughter Emily (Russell) is ostracised at school, then falls for equally awkward Luke, a friend of Tyler’s from the wrestling team. Emily confesses her hatred for Tyler, and makes Luke visit his dying father in Missouri, despite his admission that his father deserves to die for abusing Luke and his mother. Via this second-hand act of forgiveness, Emily frees herself, making father and stepmother follow her into the newly found guilt-free paradise of love.

It looks like that Shults watched Harmony Korine’s Spring Breakers over and over again in preparation for making Waves. The teen diving scenes are filmed with 360 degree rotating cameras, somehow implying direct danger. At High School, the camera pans constantly in a bid to convey the fraught nature of the setting. Moonlight and Terence Malick’s later films are also reference points for Shults. The diminishing aspect ratio has in mind Tyler’s isolation – slowly widening after Emily’s ‘rebirth’. Alexis’s killing is a particularly gruesome scene, Shults bathing her in fluorescent red. All this, with the words of the preacher telling his Sunday congregation: “We need love to bring us back”, makes for a conceptual second-hand feature. Sadly this is just retail therapy – Shults wants us to label his film as ‘ambitious’, hoping the critics will excuse his failure as a noble attempt. The director courts importance, but hasn’t yet earned it. In using Thom Yorke’s poetry at the end, he lays himself open to the emptiness of his own approach. And all this without the underlying question, who should make what type of films?. It would have made not one iota of difference if the family of colour had been replaced by Caucasians like Trey Edward Shults. If Meghan Markle made a film, this would be it. AS