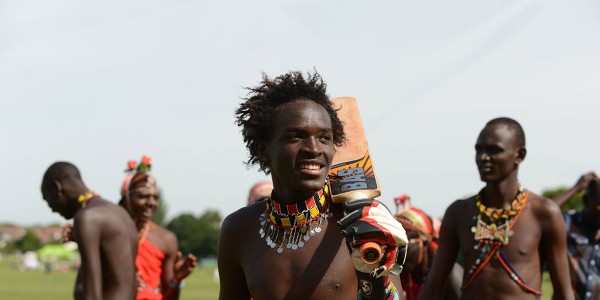 Some stories simply prove that, once again, reality is stranger than fiction: WARRIORS, Barney Douglas’ debut documentary  serves the maxim brilliantly. The tale of a group of Maasai warriors from Kenya who learn to play cricket, travel to London, (nearly) play at Lords and break the tradition of FGM in their village is a saga full of adventure, progress and, very much, beauty. The latter point is important, because the breath-taking beauty of the young female and male Maasai youngsters (coupled with the magnificent landscapes) make WARRIORS also a feast for the eyes.

It all started when South African zoologist Alya Bauer went to Il Polei village, in the Laikipia region of Kenya, to study the behaviour of baboons. As a cricket fan, she missed the game, but shortly afterwards had the local village children playing her beloved sport. Soon, the young Maasai warriors from the neighbouring villages joint in as Ngais, one of the young men who became a leading player, said “bowling is the way we throw the spear”. Much training had to be done but it finally paid off when the Maasai warriors were invited to London to play in the “Last Man standing” competition for amateur cricket teams. The two best teams would play the final at Lords, the holy shrine of world cricket. Whilst the Maasai team missed the final by a few runs, their time in London made them even more motivated, to spread the message of cricket in their region: so far they have reached 24 primary schools and five secondary schools.

But cricket is not the only mission of the young men: Female Genital Mutilation has a strong tradition in Maasai culture, girls are “circumcised” as early as eight, so they can become child brides for richer, much older men, who pay handsomely with livestock. But not only are these girls mistreated by their husbands, they also lose out on secondary education. The Warriors hold talks with the village Elders to break this brutal tradition, and finally the old men of the village agree not to “circumcise” their daughters any more as the youngsters of the village confirm that they will only marry non-circumcised brides. A joyful mother of one of the cricket players declares that her youngest daughter would be the first female in her family not be circumcised.

DOP Ben Wilkins’ clear and bright images of the mountains and wild animals are integrated in the narrative, serving at a metaphor for pure beauty, untouched by men, not simply postcard idylls. The animation is very much in the style of the naïve culture of the Maasai, who believe that they came straight down from the heavens when the earth was created. Sun and heaven are their central focus, and are always mentioned in discussions. WARRIORS is an exception: a real life fairy story with sumptuous vision and beguiling music by the director and Ali Gavan. AS

WARRIORS is available on DVD and iTunes from 25 January 2016 www.warriorsfilm.co.uk #WakeTheLion