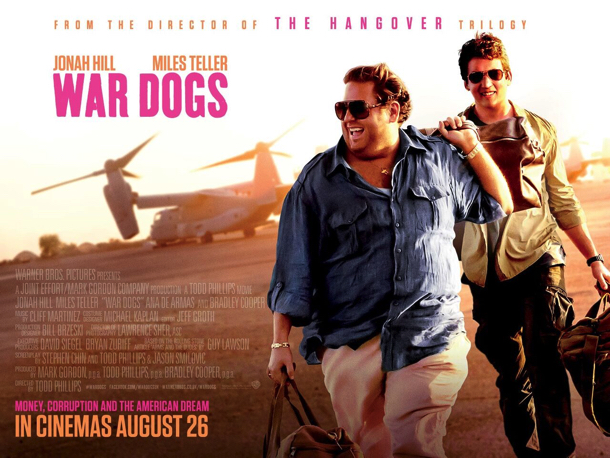 Hollywood is full of directors who have never really grown up. Todd Philips, with his Hangover trilogy, definitely qualifies as a leading contender in this category – but with WAR DOGS he has his coming-out as an adult. And, even more surprisingly: his latest feature (co-written by him based on an article in Rolling Stone) is truly funny.

We meet David Parkouz (Teller), a college drop-out, selling quality bed-linen to nursing homes, whilst also working as a massage therapist in Miami Beach. This is not exactly the career he dreamed of and when he meets long lost school friend Efraim Diveroli (Hill), who runs a one-man conglomerate called AEY (which stands for nothing), trying to get into the arms business, David is only too keen to join.

We are in the middle of the Iraq war and the Pentagon, having given giant companies like Halliburton and Lockheed Martin countless no-bid mega defence contracts, wants to level the playing field somehow, and invites everyone to bid for the small fry contracts. Whilst Efraim obviously adores violence, his office wall features a big poster with Al Pacino in Scarface, shooting wildly. David, on the other hand, is a pacifist and he and his – soon to be pregnant – girlfriend Iz (de Ama), have been on many anti-war marches. After spending hours on the net, the duo finally lands their first contract: they have to smuggle Berretta guns from Jordan to an US unit Bagdad. The two have to cross the “Triangle of Death” – without being aware of it – but their 17000 $ reward makes it all worth it. At least for Efriam, because Iz finds out about David’s activities and leaves him with their daughter Ella. When David meets a shady arms-dealer (Cooper) in Las Vegas, AEY hits the big time: $ 300M worth of AK-47 munitions is rotting in an Albanian warehouse. The only hitch: it was manufactured in China, which means it is on an embargo list, and can’t be used by the US military. But David and Efraim have another brilliant idea: they re-package the munitions, making them products of a neutral country. The whole exercise takes months, after which, Efraim, always with an eye for extra-profit, “forgets” to pay the Albanian helpers, which will have consequences.

One could call WAR DOGS a comedy of terror. Instead of a buddy movie we get the opposite: Efraim, always trying to be everything to everyone, has cheated his way through life by mirroring people’s needs. He uses them constantly, pretending to be something he is not. David is naive, and obviously in need of a friend, so that he glorifies their High School past. Whilst Efraim is aware of the danger all the time, always pretending that everything is will be alright, David only wakes up to the many threats of their ”business” in stages. In short: David has something to lose (his family), while Efriam, the chameleon, has no close ties with anybody – apart from himself. Male friendship has never been caricatured so efficiently.

DoP Lawrence Sher (Garden State) has found a colour palette for every stage of this adventure: David and Iz’ old home has warm brown colours, their new home at the beach front is cold, arctic blue – symbolising the soullessness. The Bagdad scenes are shot in primary colours, the reality of war never far away. Albania is a dark, unforgiving environment, a true set for a horror movie. Teller and Hill feed of each other well, the only drawback being that Iz’s role is not fleshed out enough. We can only hope that Philips stays with his newfound maturity, because he owes it to his talents as a filmmaker. AS