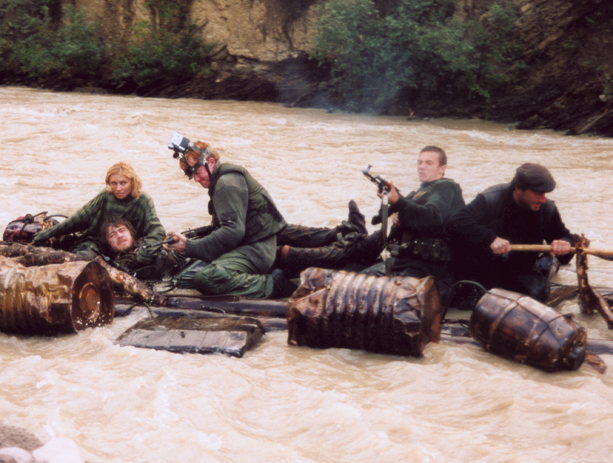 There is an upbeat cynicism to Aleksei Balabanov’s tale of Chechen gangsters that feels bracingly authentic and unashamedly pragmatic. Tightly-plotted yet unpredictable, the story unfolds from the interrogation cell of Ivan Yermakov (Sergei Chadov), a Russian soldier who has returned from a mission to release English and Russian hostages taken by Chechen rebels in the aftermath of the fall of Grozny in 2000.

Amongst the captives is John Boyle (Ian Kelly), an effete, almost comical, whingeing British actor (think a ginger John Cleese), who has been touring with a Shakespeare play and his girlfriend Margaret (a fabulously stoical Ingeborga Dapkunallit); Russian, Captain Medvedev (Sergei Bodrov) and a Jewish businessman.

After the ritual decapitation of an unnamed Russian soldier (to cries of “Allah Akhbar” and actual audio footage from a  internet video), the hostages are finally taken away and holed up in a remote mountain enclave.  But the gangster leader, Aslan Gugayev (a fiercely convincing Giorgi Gurgulia), wants money from the West and so releases John, sending him off to London to raise the ransom of £2 million. Failure will result in Margaret’s death although once in Whitehall, John predictably draws a blank with the ‘powers that be’, both Russian and British. Then an executive from Channel 4 offers to put up £200K  in return for John’s video footage of the mission. A further £400k comes from John’s own coffers.

Sergei Chadov’s debut is a quietly stunning portrayal of Sergeant Ivan: canny, sardonic and impeccably organised with a cigarette rarely out of his mouth, he leaves a grim postwar future in his home town of Tobolsk, but his decision to accompany John back to Chechnya is swayed more by a sense of national duty to Captain Ruslan and his family than the prospect of being compensated for his efforts by a slice of John’s cash. And although John appears weak and ineffectual, when the chips are down he makes a wise choice in hiring the honest and reliable Ivan, who emerges a figure worthy of national pride and heroism. Through shrewd decision-making and gung-ho aplomb, the pair make their way back via Vladikavkaz (for equipment), later enlisting the help of Chechen shepherd Ruslan (Evklid Kyurdzidis), a rival of Aslan’s tribe, who is kept under the cosh by Ivan but whose knowledge of Chechen mores proves invaluable on their final leg of the journey back to the Chechen camp to do business with the gangster rebels.

Dark humour seeps through the stark realism of this satisfying story; well-told, brilliantly put together and easy to follow in its straightforward narrative structure. The only sadness is that Aleksei Balabanov won’t be telling anymore stories from the rich and eventful history of his native Russia. MT

WAR IS PART OF THE ALEKSEI BALABANOV SERIES AT THE SLOVO FESTIVAL, WHICH RUNS COURTESY OF ACADEMIA ROSSICA DURING FEBRUARY AND MARCH 2014. FOR THE FULL PROGRAMME VISIT the Website