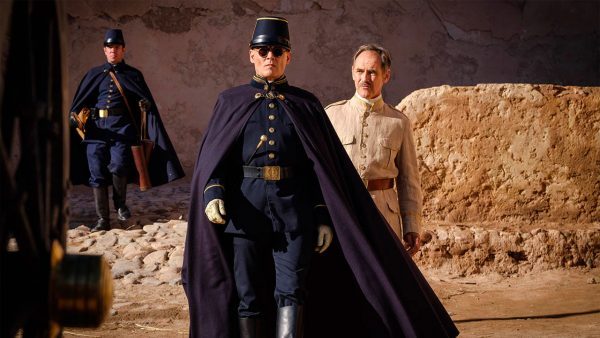 WAITING FOR THE BARBARIANS is the Oscar nominated director’s third drama and his English language debut following on from Embrace of the Serpent and Birds of Passage. Based on the novel by Nobel Prize-winning South African writer J.M. Coetzee, who also wrote the script, it takes place in an unspecified country and feels like a small scale version of Lawrence of Arabia with its exotic magnetism. But this is a far more sober parable that sees Rylance’s archaeologist ‘Magistrate’ falls prey to his own desires – there’s no fool like an old fool – when he falls for a young nomadic woman who has been captured in a desert raid by soldiers in the remote outpost where the he has made a niche for himself and gained the trust and respect of the locals.

‘The Magistrate’ is a cultured gentleman who speaks the local language and understands the customs – although the characters are made up of a multi racial group from North African to Mongolian and the locations are in Morocco. His experience of the country is a peaceful one very much in the vein of “live and let live”. His view is that Colonial rule is an imposition rather than a civilising influence, and that forcing the local populace to accept the ways of the interloper is tantamount to to war.

When Johnny Depp arrives as the po-faced effete Police Chief Joll he has other ideas. A couple of local “barbarians” have been arrested for thieving, Inspector Joll insists on a draconian interrogation, leaving them bloody and beaten and extracting from them a putative admission of treachery that enables him to maintain his position of colonial oppression.

All this power-posturing is as relevant now as it ever was but the choice of a non-specific cultural backdrop is more difficult to reconcile on film than it is on the page, left to our imagination. And its odd to see Mongolian tribesmen roaming around in the Moroccan desert. But the hero of the piece eventually turns into an outcast after he becomes sexually obsessed by the “barbarian” girl (Mongolian actress Gana Bayarsaikhan). His subsequent decision to return her to her family is deemed a dereliction of duty, allowing Joll to come down heavily with his metal cosh – another fantasy element to the narrative, along with the alarming finale.

Waiting for the Barbarians is an admirable drama but one that leaves us contemplating its message rather than its characters, who unreachable despite the best efforts of a stellar cast. Robert Pattinson is handed a rather bum role as Joll’s sneering secretary Officer Mandel, a farcry from his strong recent run with the French Dauphin in The King, High Life and The Lighthouse. Rylance manages to make us pity and root for The Magistrate up to a point, even though he becomes a figure of fun in the end for his Christ-like goodness. Fortunately the baddies get their come-uppance: and Rylance eventually finds redemption giving the film a satisfactory conclusion and some scary moments such as the menacing final scene. MT