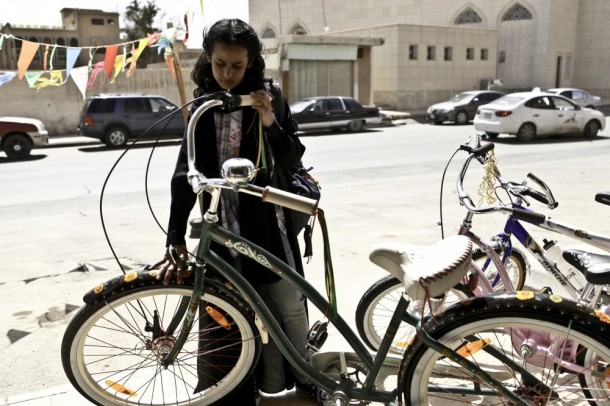 Wadjda is a jewel in the crown of contemporary Middle Eastern film. The first full-length feature to be shot entirely in Saudi Arabia, it’s also directed by a Saudi woman. Despite the vast wealth of that country, it was impossible to raise finance for such a venture.  So the funds came from Europe and the feature was backed by the Sundance Institute.

In the modern world of Saudi, there’s nothing religiously radical or precious about Wadjda. She is a fiercely independent ten-year-old, as bright as a button and way ahead of her time.  Living with her mother in a dusty suburb of Riyadh, she goes to school but sees her studies as a means to an end: to win the school prize so she can buy a bike and race the boys instead of taking the taxi provided by her father.  He visits occasionally but has another ‘wife-in-waiting’, hoping that this one will provide him with the prize of a son. But Wadjda would rather be making wristbands and recording music discs and selling them for a profit than waiting to be married off to a local man.

Al Mansour’s clever script reflects every subtle nuance of Muslim society and Waad Mohammed’s charismatic turn as Wadjda is full of insight, wit and cheekiness marking her out to be a talent in the making. Supported by a cast of newcomers and seasoned actors: her onscreen mother Reem Abdullah and Ahd as headmistress Ms Hussa give performances of considerable allure.  Lutz Reitemeier’s cinematography brings clarity and precision to the visuals.

The story is set against the backdrop of a society where women are the isolated chattels of men and merely exist to provide offspring. Woman are highly competitive with each other, gossiping and policing the sisterhood’s moral and religious probity with an eagle eye and a sharp tongue. And whereas in Western society women compete in a machiavellian way for desirable males, in Saudi society this competition is right out there in the open and their only raison d’être in life.

Wadjda is a touching and playful portrait of a spunky little girl – but more than that it’s a fascinating insight into a society with medieval values in the 21st century, and not all are to be dismissed as outdated. But even after all the dust has settled on its novelty value, this is a drama to be reckoned with on the international arthouse scene. MT