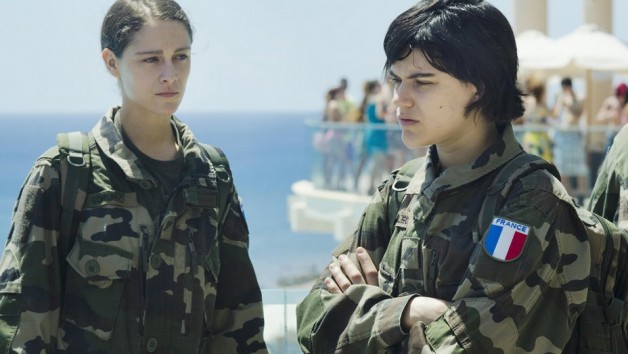 Sisters Delpine and Muriel Coulin (17 Girls) surprise us with a tense yet reflective portrait of French women, fighting in the army alongside men. As one would expect, misogyny, in all forms, from verbal to violent, is at the centre of this captivating film that stars Ariane Labed and Soko.

Set on the island of Cyprus in the autumn of 2012, just before newly elected President Hollande would withdraw French troops from the Afghan war, STOPOVER follows a battalion of French soldiers returning from a tour of Afghanistan. Before they go back to their families, the army has set up a demob camp in a luxury hotel as an antidote to PTSD.

For two close friends, Aurore (Labed) and Marine (Soko), who grew up together in Lorient, and joined the army together these three days will decide their future (“Lorient is an army town, what else was there to do?”). Together their debate the aftermath of conflict: “What the hell was I doing in Afghanistan” – but they will both reach differing conclusions by the end. After their arrival in the hotel, they are annoyed to have to share their room with a third person Fanny (Romain), but soon the daily remedial sessions – with help of virtual reality simulations – take over. All the soldiers have reacted differently to the hostilities, most of them are traumatised by the loss of their friends. It is that the three days merely scratch at the surface, the whole exercise is just a placebo. The men are sexually frustrated, at first voicing their repressed anger at the women soldiers, then, after the trio drives off with some local men, the violence explodes. Two of the women get off with Cypriots, and after the French soldiers follow them to a local restaurant, there is talk about “taking our women and our wine”. Knives are drawn, before the French soldiers drive off. On the way to the hotel, they kill a goat and one of the soldiers tries to rape Aurore “I show you that I have balls, but you don’t”. Marine just comes in time to save her friend. On the flight to France, Aurore asks Marine why she is fighting – Marine’s answer “defending France, Europe”, which is not enough for Aurore any more.

The French title Voir du Pays means “see the world”, a slogan the Army uses to seduce recruits to join. Aurore and Marine have seen little outside Lorient before they embarked on their army careers. But the directors make it clear that women experience fighting on a different level: Marine can’t get the image of her dead compatriot out of her head. “It goes round like a loop”, she tells Aurore. On the other hand, some of the male soldiers are thirsty for more battle. Aurore’s statement regarding her male fellow soldiers: “They need an enemy”.

DoP Jean Louis Vialard creates a fake world in the hotel in stark contrast to what have happened in Afghanistan. Once again leads Ariane Labed and Soko are impressively convincing in this watchable and resonant war drama which won Best Script in the Un Certain Regard sidebar at Cannes 2016. AS