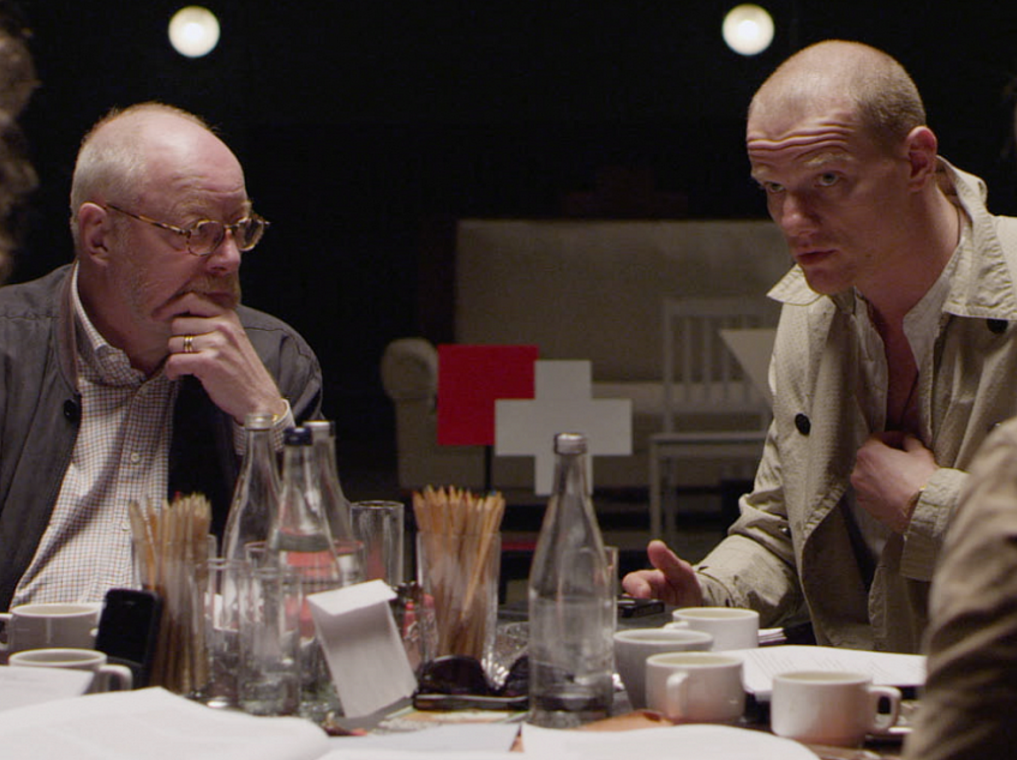 “For you, cinema is just a spectacle, for me – almost a world view.” declared the Russian poet Vladimir Mayakovsky (1993 – 1930) who as well as being a socialist ‘rock-star’ performer was also an actor of the silent cinema era (The 1918 The Ladyand the Hooligan, his only surviving film, can be watched on YouTube.) Mayakovsky was part of the Russian Futurist movement believing that art and society would reject the past and strive for a new consciousness. His multi-faceted and contradictory personality was clearly the result of a troubled beginning, and his life went on to be accordingly unorthodox. Yet director Alexander Shein has managed brilliantly to employ a non-linear and iconoclastic style for VMayakovsy that captures (though often it can barely contain) this incendiary poetic talent now mythologized, alongside of Pushkin, in modern Russia.

VMayakovsky opens with a group of actors in a studio rehearsing a film script about Mayakovsky. Gradually they assume the appropriate characterisation of the poet and the people who knew him: body language, manners and revolutionary language start to emerge. This is intercut with fictionalised documentary footage of Lilya Brik (The poet’s muse and lover played by Chillopan Khamatova) as an elderly invalid reflecting on her past. One amusing moment has a gift arriving from perhaps Mayakovsky’s daughter. Lilya’s carer says it’s a package form someone called Saint Saens but it’s not the French composer, but Yves Saint Laurent. Real documentary footage of protesters in modern Moscow; recitals of Mayakovsky’s verse, social gatherings, meetings and a recreation of a Mayakovsky play keep bursting into the film. This becomes a dazzling, energetic collage of impressions and incidents that doesn’t sidestep things into an obvious drama-doc. There’s no excessive use of 1930s documentary footage or any Shostakovich ‘theme related’ music. Shein maintains a restless pace for VMayakovsky – for it’s an experimental film intent on destroying the bio-pic.

VMayakovsky is two hours long: after an hour of arresting cinematic effects its biographical data is realised as a kind of ‘theatrical tableaux’ with occasional filmed exteriors. This shift of tone deepens the film and the superb performance of Yuri Kolokolnikow (As Mayakovsy) reveals him to be a tragic character. Mayakovsky was admired by Lenin yet viewed with suspicion by Stalin and The Russian Association of Proletarian Writers: eventually falling completely out of favour with his audience and the authorities who began to detest experimentation in the arts.

There’s a marvellously satirical scene where the workers are collecting the autumn crop of apples performed against a backcloth of Stalinist Palace of Culture architecture. A close friend informs Mayakovsky that he’s been awarded a state apartment to live in. But cautions him that his writings need to conform to the new social order. This army companion (Who is also being pressured) has a fellow writer colleague of Mayakovsky released from jail and then agonises over Mayakovsky’s unwillingness to change his art. Stalin’s totalitarian world is soon conveyed as a theatre audience of complaining hats, without heads, wittily grouped in a surreal space.

VMayakovsky isn’t an easy film to watch and not everything works. Why is real footage of Communist North Korea shown? What are the crowd, in present day Moscow, actually protesting about?  And why leave out Mayakovsky’s film acting? Yet in spite of some excluded and not properly thought-through ideas, VMayakovsky provokes, stimulates and entertains: rather than an audience beginning to fully understand Mayakovsky, they experience a poetic force called Vladimir Mayakovsky who was a very vulnerable man.

VMayakovsky is a terrific achievement that reminded me of some of the film experimentation that we took for granted from the early sixties to the mid–eighties (Hans-Jurgen Syberberg, Jacques Rivette and the better side of Ken Russell are an obvious influence on Shein.) Sadly Shein’s feature isn’t on any form of limited release. It’s had a few University screenings in London and you can now only catch it if you take a train to Glasgow, Cambridge or Oxford this winter.

I saw VMayakovsky at a cinema inside a large London bank. The director introduced the screening, telling us that it was a joke that his film was being screened in a bank as he himself had just become bankrupt. Buying a ticket may not help to keep Alexander Shein financially afloat: yet your support could just spur him on to produce more work like the remarkably assured VMayakovsky. Alan Price © 2018