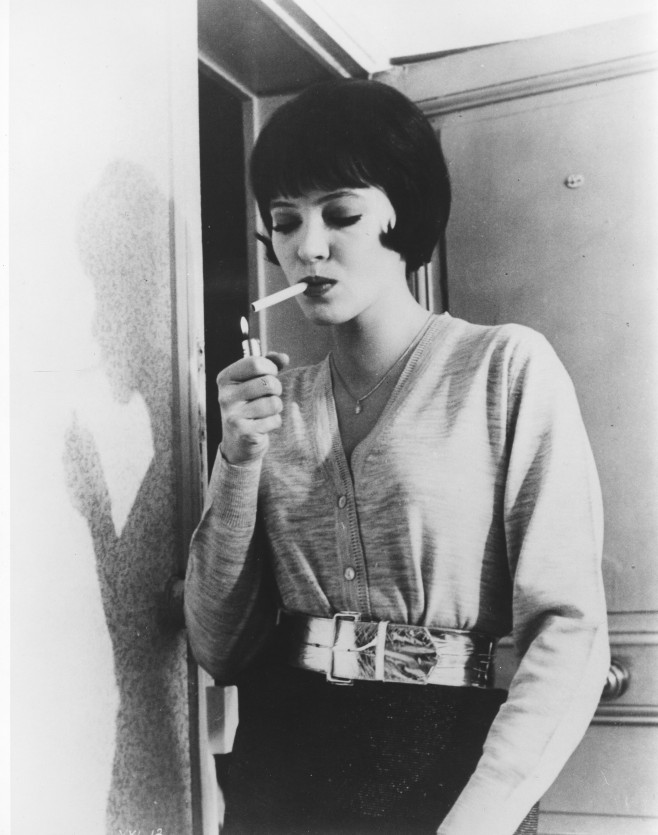 VIVRE SA VIE is a decisive step in the development of film aesthetics – but it is also the result of the emotional turmoil between its director Jean Luc Godard and the film’s star, Anna Karina, whose marriage had been very much on the rocks when filming started in February 1962 in Paris.

Karina, ten years younger than Godard, had met the actor Jacques Perrin whilst filming Le Soleil Dans l’oeil on Corsica in September 1961, where she celebrated her 21st birthday. During the shoot, Karina decided to leave her husband, Godard, for Perrin: “I admire Jean-Luc very much. But he’s of another generation. Whereas Jacques is my double”. On the night of November 21s Godard destroyed all their belongings in the flat they shared and left her. Karina, who reportedly had taken barbiturates, was taken to hospital. Godard and Perrin met for a duel with dice, then settled for poker, but when journalists crowded their table, nothing was decided. Whilst the papers reported over the Christmas period that Karina would marry Perrin, Godard and Karina got back together in January 1962 and he announced that he would direct her in VIVRE SA VIE – with Godard deciding that Karina didn’t need to be paid as they were living together (!).

Godard was a great admirer of Berthold Brecht (Cahiers had run a special edition dedicated to him), and VIVRE SA VIE was to be a tableau of 13 chapters, with the master of ceremony introducing every one. Godard obviously had Brecht’s ‘Three Penny Opera’ in mind” and wanted “to shoot only on location, but without making a film of reportage”. But the director abandoned not only the master of ceremony idea (replaced by inserts about the chapter contents), but also changed the ending: instead of a sardonic ending – Nana becoming a rich luxury prostitute -, she is killed at the end of chapter 12, now the last one. Needless to say, that Karina was furious, the shooting was halted to for a few days.

After the camera lingers for a long time on her back, Nana (easily deciphered as an anagram of Anna) tells Paul (Labarthe), the husband she had left, leaving her child behind “I want to die”. She has dreamed for a long time of becoming a film star and tells everyone that she has acted in a film with Eddie Constantine: Karina, Godard and Constantine acted un-credited in Varda’s Cleo. She shouts at Paul: “If we get back together, I will betray you again.”

Nana, who works in a record shop, is always broke, unable to pay her rent and humiliated by the concierge and her assistant. She sinks into prostitution, first as an amateur then, after meeting the pimp Raoul (Rebbot), as a professional. Her lonely and dreary existence is shown as heart-breaking; whilst waiting in street for a customer in Port Mailliot she is standing under a shop hoarding called Hans-Lucas (Jean-Luc in translation). Meeting a philosopher (Parain) in a café, Nana is told the story of Porthos, who was murdered. After meeting a young artist engrossed in a book by Edgar Allen Poe, (voiced-over by Godard) Nana falls in love and wants to start a new life, but is literally sold by Raoul to another pimp in a street.

Raoul Coutard’s triste black and white images and long takes, mostly over three minutes, evoke what Godard had in mind: “I was thinking – like a painter in a way, of confronting my characters head-on – as in the paintings of Matisse or Braque”. Godard seems to circle his environment, like a researcher, but he always returns to Karina: from the back, the front, the side and even in parts. She is his universe, but he can’t decipher her. Still, the search alone seems to make him happy. In an experiment in language, Nana is trying to intonate a sentence in different ways; Godard shows that there is no absolute truth in our words, and he always returns to her vulnerable face with the Louise Brooks haircut.
VIVRE SA VIE won the Special Jury Price and the Critic’s Prize at the Venice Film Festival in 1962. AS