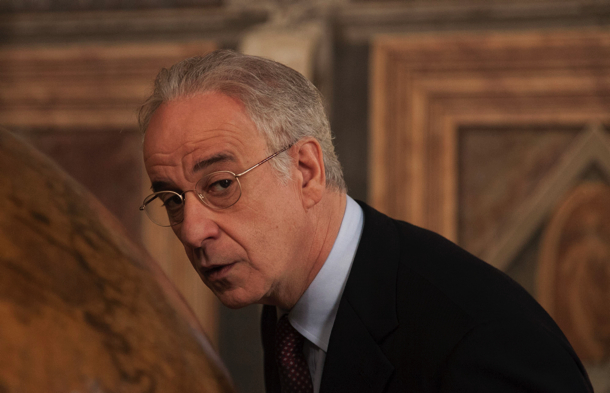 Even if politics leaves you cold you will warm to Roberto Ando’s imagined political comedy Viva la Liberta (Long Live Freedom) with its dynamite performance from Toni Servillo who recently starred in La Grande Bellezza). No stranger to Italian political roles, he gave an exultant portrayal of Giulio Andreotti in IL DIVO and here he plays Enrico Oliveri, a fictional leader of the shadow cabinet. 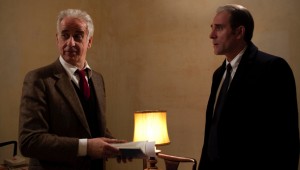 Truth is stranger than fiction and Italian politics is certainly stranger than most with its colourful characters such as Berlusconi, and this opens up glittering possibilities for Roberto Ando’s provocative premise. Anyone with any knowledge of Italy’s state of affairs will appreciate the gently comedic take here: In Ando’s imaginary world, Oliveri’s opposition party has seriously lost its way so it’s not really surprising when its leader decides to go AWOL in exasperation. But it doesn’t end there. After disappearing,  Oliveri is replaced by his identical twin, Giovanni Emani, who seems to have completely lost his mind,  much in the sam vein as Nanni Moretti’s recent Habemus Papam.

Here Servillo plays both roles.  As Oliveri he is staid, serious and controlled.. He’s even distant with his understanding wife Anna (Michela Cescon). Naturally excuses wear thin after a couple of days and his chief secretary, Andrea Bottini (Valerio Mastandrea), is forced to come up with some sort of cohesive reason for his absence. After conferring with his wife, he discovers that Oliveri’s twin, Giovanni Emani (freshly out of a mental home) should take his place in the cabinet, to keep up appearances.  But he warms to the role: and Servillo flips with ease into the smug-faced, uber-confident leader glibly inspiring his colleagues, promising voters a shedload of reforms and generally galvanising the opposition into action.  As Oliveri, meanwhile, he takes refuge in the home of his ex Danielle (a calmly seductive Valeria Bruni Tedschi) who is now a wife, mother and script-superviser.

But it’s as Emani that Servillo really shines and although Ando’s film lacks the vibrant audacity of Paolo Sorrentino’s Il Divo, Viva La Liberta is a seriously grown-up, beautifully-crafted affair that stands up to scrutiny of politically engaged audiences and also looks superb thanks to Maurizio Calvesi’s sleek visuals. Servillo manages the dual roles perfectly mastering the slick, glibness of Emani and the quiet dignity of Oliveri with aplomb.