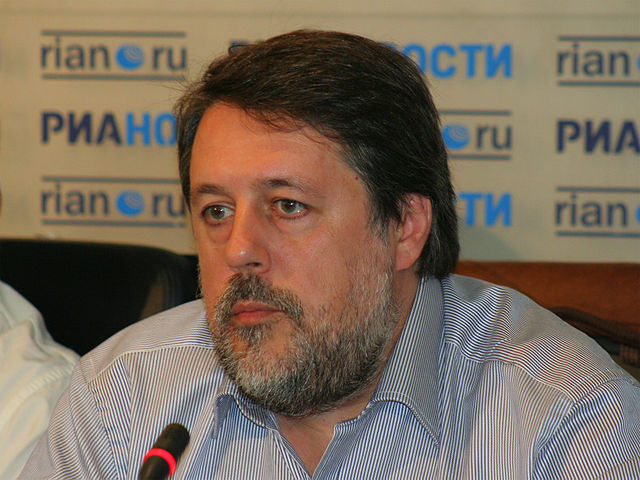 Vitaly Mansky needs no introduction among followers of the London Russian Film Festival. For several years, Mansky has been an integral part of the Festival, curating its ever prominent documentary programme
and enriching its programme with his own work.

Born in 1963 in Lvov, Ukraine, Mansky made his first foray into the world of film in 1989, and has since gone on to direct over 30 films. His reputation as one of the world’s leading documentary filmmakers is clear from the litany of awards he has received over his career from festivals all over the world. Mansky’s devotion
to his medium is not just confined to filmmaking, with the director founding ArtDokFest, the premiere Russian documentary film festival, as well as editing online magazine VERTOV.RU . In recognition of Vitaly Mansky’s enduring contribution to the London Russian Film Festival and documentary filmmaking, the Festival is delighted to be showing a retrospective of Mansky’s dazzling and extensive oeuvre.

PriVate cHrOnicles. MOnOlOgue / ЧАСТНЫЕ ХРОНИКИ. МОНОЛОГ Russia, 1999, Documentary, 86 min
Drawn from over 5000 hours of film material and 20,000 still photos, Private Chronicles is an incredible experiment in biographical film. Woven together from footage of the 60’s, 70’s and 80’s, the film is a fictional yet somehow true portrait of Gagarin’s generation, encompassing collective life and individual experience.

BROADWAY. THE BLACK SEA / БРОДВЕЙ. ЧЕРНОЕ МОРЕ Russia, 2002, Documentary, 72 min
Community. Carnival. These are the themes of Mansky’s Broadway as it follows the fleeting life of a makeshift holiday camp on the shores of a beach in the Caucasus. Those too poor to go on holiday flock to this place every year, singing, dancing, laughing and crying. Broadway follows the carnival as it burns, fades and dies, leaving only a shabby heap on the shore.

PATRIA O MUERTE / РОДИНА ИЛИ СМЕРТЬ Russia, 2011, Documentary, 99 min
What does a person imagine when they hear about Cuba? More importantly, what is Cuba? It is hard to find any other country where the discrepancy between image and reality is as great as it is in Cuba. This Film is about people who were born before the revolution and now are coming closer to the end of their lives and realise that ‘Motherland’ equals Death.