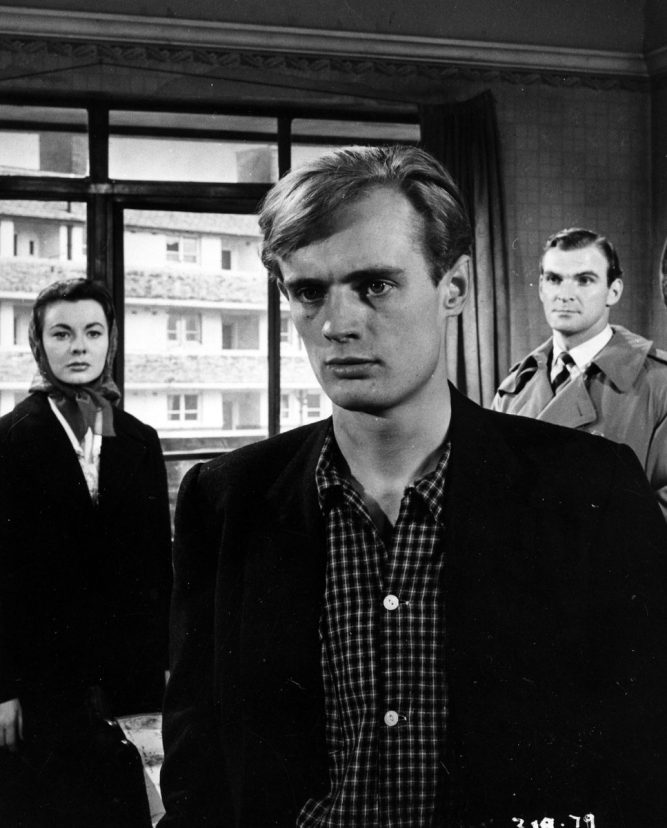 In the 1950s British director Basil Dearden (Victim, 1961) made a string of solidly-crafted features that explored racism, homophobia and other social issues that once again came into focus once the War was over. Although not as gritty and powerful as Rossellini’s Rome Open City the crowd scenes in post war Liverpool express the same frothing social unease in this slice of British Neo realist pic that make great use of the war-scarred locations of a city, enlivened by its immigrant influx from China and Ireland, yet down on its knees in the aftermath of the Blitz. Some critics have accused Dearden of being maudlin and preachy but there’s nothing remotely sentimental about Violent Playground , written by James Kennaway, with brilliant exterior photography by Reg Johnson, set mostly in the Gerard Garden estate of the Northern port.

It stars a hard-nosed Stanley Baker as Detective Sergeant Jack Truman leading an investigation into an arson attack perpetrated by the so-called “firefly” when he rubs his superiors up the wrong way and is transferred to Juvenile Liaison, a remit that sits badly with his tough guy image, but soon brings out his ‘caring’ side. His first ‘case’ concerns two under-fives, Mary and Patrick Murphy who are engaged in a pilfering racket in the High Street. Returning the kids to their home on the Estate, he comes up against the leader of the rebellious youth group and older brother of the pint-sized delinquents, Johnny Murphy, and McCullum makes for an impressive criminal in the role.  Johnnie and his gang have been terrorising the local Chinese laundry workers Alexander and Primrose. But when Johnnie sees Truman, whom he immediately identifies as a cop, even though dressed in civvies, he tamps down his activities. Later Truman will fall for the forth member of the Murphy family, the responsible Katherine (Heywood).

Meanwhile Johnnie goes about his business, burning down properties, Truman not cottoning on to his identity, and only making the connection when Johnnie accidentally kills Alexander  while making a getaway from a crime scene.  Armed with a machine gun, Johnnie then holds siege to the Scotland Road school building full of kiddies. A local Catholic priest played by Peter Cushing is also injured when he tries to gain access to the building via a ladder.

The hostage scene is the triumph of the feature, and brilliantly directed. Baker makes for a stern but compassionate hero, playing against type here on the right side of the law. McCallum rocks as the psychotic rock’n’roll antihero, a far cry from his suave Man from UNCLE image that was to follow. The music sets him (and his gang) in a sort of trance, where he even considers taking Truman on, before he finally comes to his senses. Heywood’s Kathy is a too goody-two-shoes to be believable. But Brona and Fergal Boland as Mary and Patrick, often steal the show in naturalistic performances as the two precociously criminal kids, often taking the wind out of Baker’s wings.  Despite his spiritual credentials Peter Cushing feels strangely underwhelming, his Father Laidlaw is ineffective and under-cooked. Dearden directs the mass scenes of the parents in front of the school, clamouring for their children, with great sensibility – a good rehearsal for Khartoum (1966). This gritty story with its important social implications certainly suited Dearden’s style, if only he’d taken on more of the same, l instead of opting for soppy relationship conflicts.