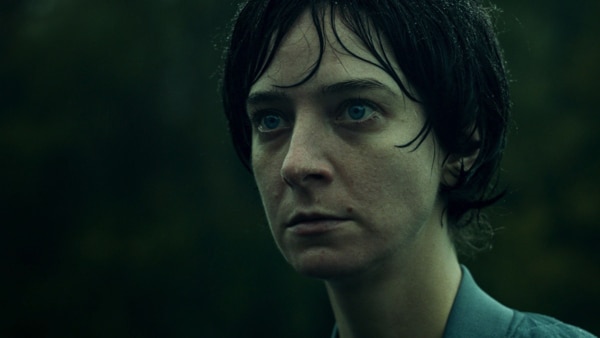 A rape and revenge thriller that goes all the way, yet we never lose empathy for victim in this collaborative first feature from Dusty Mancinelli and Madeleine Sims-Fewer, who also stars in the main role as Miriam.

Miriam and her husband Caleb (Abili) have come all the way from their London home to visit Miriam’s sister Greta (Maguire) and her husband Dylan (LaVercombe) in the Canadian wilderness. As their solitary car motors along the winding forest roads, we are reminded of the opening scenes of the The Shining; a wolf and his dead prey plus a mournful score by Andrea Boccadoro makes up the ominous picture.

Miriam and Caleb hardly talk to each, and are clearly heading for an existential marriage crisis. In contrast, Greta and Dylan frolic around in nature, happy killing animals and eating them for dinner. Greta considers her rabbit slaughtering skills  as a big achievement: “I have learned not to rely on others to do things for me”. Hmm. Miriam and her husband obviously have a much more sophisticated life in London, and Miriam tries in vain to talk her sister into joining her in the capital. There is obviously a long history between the two, symbolised by Miriam’s dream about her sister hanging herself in the next room. But the real secret is Dylan’s rape of his sister-in-law: when Miriam is courageous enough to tell her sister, Greta takes the side of her husband, blaming Miriam, who – left alone by everybody – plans her revenge which forms the main part of this grisly but innovative drama.

DoP Adam Crosby’s camera follows the emotional ups and down with brutal close-ups and long bird-eye shots. There are parallels to Jennifer Kent’s Nightingale, as the shaming of the victim looms large until total obliteration is the only way out. But the images avoid female exploitation, which so often is mistaken as empowerment. A non-linear narrative is sometimes bewildering, but in the end helps to enforce the sheer hell of its main protagonist. Violation is often vicious in its rough hewn depiction of abuse which so often relies on melodrama to deliver its gruesome message. AS