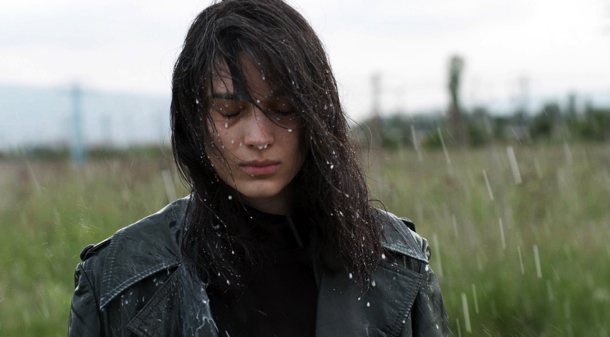 First time director/writer Maya Vitkova has managed to create a stunning debut film, which overwhelms the audience with its aesthetic brilliance and epic narrative, a mixture a hyperrealism and political slapstick. In Bulgaria in the late seventies and Boryana (Chichikeva), a librarian, and her husband Ivan (Dimov), a doctor, are living with Boryana’s mother (Krumova) in a tiny flat and all sharing a bedroom. Boryana feels no allegiance to her mother who she calls “a party member, not a mother” and wants desperately to escape to the West. When Boryana gets pregnant, she tries, in vain, to get rid of the child, chain-smoking to the end of term. Symbolically, little Viktoria is born without a belly-button – which is seized upon by the authorities as a proof of communist superiority: Viktoria is declared to be “Baby of the Decade” and communicates with Bulgaria’s President Zhivkov (Spasov) via a personal phone line. Her parents too are given privileges: a car and a new flat.

All if this makes Boryana even more bitter and resentful, since her emigration plans are squashed. As she grows more distant from her daughter that even her own mother; Viktoria, played at different ages by Daria and Kalina Vitkova, develops into an arrogant young girl well aware that a phone call to Zhivkov could mean punishment to everyone crossing her – including her own parents. But all this comes to an end in 1979, Viktoria cutting symbolically the phone line to Zhivkov after his last message: “It’s all over”. Her parents separate and Viktoria moves in with her maternal grandmother, who, unable to speak after a stroke, can only communicate in writing. After the old woman dies, Boryana shows great care in preparing the body for the funeral, a gesture too late, but nevertheless moving.

The narrative is intercut with newsreel sequences from the communist past: instead of being awe-inspiring they are revealed for what they really were: slapstick comedy at its best. But the grip of the Stalinist regimes on the psyche of their population was anything but laughable: the material depravation was nothing compared with the emotional repression. Vitkova shows this vicious cycle: Boryana punishing her daughter with emotional neglect, just to get even with her own mother. Husband Ivan is shown as a mild, but cowardly figure, which mainly stays on the periphery of the narrative. Viktoria is the only member of her family who tries to come to term with her loveless upbringing, trying to learn from her mother and grandmother. But Vitkova leaves no doubt that the trauma of the past needs a long time to heal – and that a greater access to material goods might be more of a hindrance than a solution. Filmed with diffuse lighting, the suberb cast, particularly Chichikeva, enact a “Trauerspiel” which is both emotionally moving and enlightening. Vitkova delivers a mature epic, original and innovative, but always concerned with delivering its humanistic message.AS