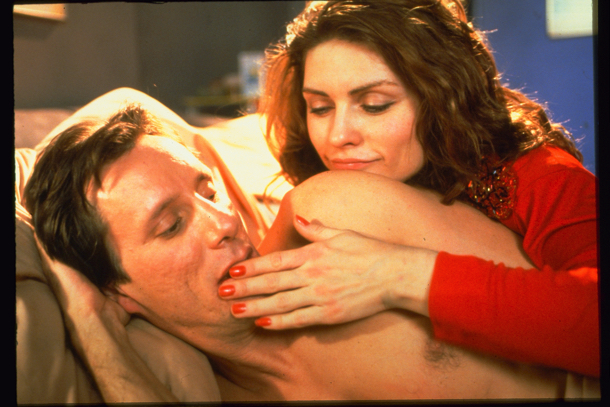 Max Renn (James Woods) is looking for fresh new content for his TV channel when he happens across some illegal S&M-style broadcasts called ‘Videodrome’. Embroiling his girlfriend Nicki (Debbie Harry) in his search for the source, his journey begins to blur the lines between reality and fantasy as he works his way through sadomasochistic games, shady organisations and body transformations stunningly realised by the Oscar-winning makeup effects artist Rick Bakeailed by his contemporaries John Carpenter and Martin Scorsese as a genius, VIDEODROME, was Cronenberg’s most mature work to date and still stands as one of his greatest.

In this 1983 cult classic Cronenberg outing, James Woods is the standout and Debbie Harry is convincing as his sexually experimental girlfriend in a visually audacious and stunningly disorienting drama that sees the director exploring dangerous sexuality and technological obsessions in collaboration with his cinematographer Mark Irwin. Howard Shore’s haunting score strikes a conjures up a similar atmosphere of dread as Wendy Carlos and Rachel Elkind achieved in The Shining

4 disc pack includes short films Transfer (1966) & From the Drain (1967) and newly restored early features Stereo (1969) and Crimes of the Future (1970). Alongside a wealth of archival content, this lavish new edition will feature a stunning newly restored high-definition digital transfer of the unrated version of Videodrome, approved by both Cronenberg and cinematographer Mark Irwin.

Other features on the discs include brand new interviews with cinematographer Mark Irwin and producer Pierre David, alongside the feature AKA Jack Martin in which Dennis Etchison, author of novelizations of Videodrome, Halloween, Halloween II and III and The Fog, discusses Videodrome and his observations of Cronenberg’s script.

CAMERA (2000) Cronenberg’s short film starring Videodrome’s Les Carlson will also feature on the discs bonus content alongside the complete uncensored Samurai Dreams footage with additional Videodrome broadcasts with optional commentary by Michael Lennick. Two additional featurettes by Michael Lennick, Helmet Test and Betamax, which look at the effects featured in the film will be also be included.