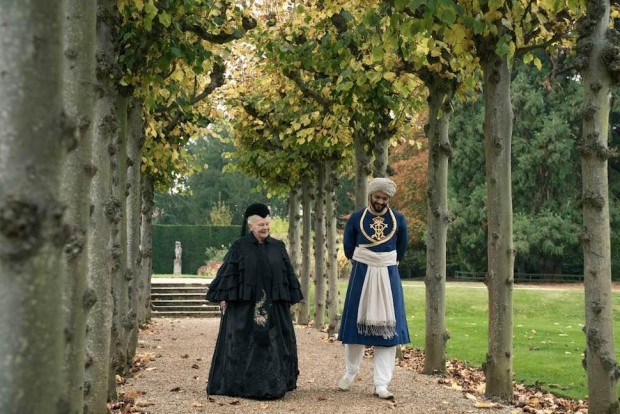 Queen Victoria had an eye for a good-looking man and clearly missed love and sex after her beloved husband Albert died. In his latest racially-themed, glossily-mounted costume drama Stephen Frears makes hay of the final years of Victoria’s reign (from 1887-1901) with this elegantly saucy snapshot of her last dalliance, purely purely based on friendship and companionship, between the Queen and an Indian clerk, Abdul Karim, sent from Agra to deliver a gold medal in recognition of her Golden Jubilee.

Judy Dench plays Victoria and we really feel for her when she tearfully expresses her feelings of abject loneliness, isolation and responsibility as longest-standing British Monarch and Empress of India: “everyone I loved has died, and I just go on”. Ali Fazal steps fills the void as a convincing Karim who goes on to become her teacher, spiritual adviser and devoted friend. Lee Hall’s witty and engaging script trips lightly over the casual racism of the era contrasting the bitter rivalry and infighting of her courtiers and fey son Bertie with the fair and liberal-minded attitude of Queen Victoria herself in this enjoyable and sumptuously-crafted royal romp. MT

Stephen Frears was born in Leicester, England, and studied law at Cambridge University. His films Sammy and Rosie Get Laid(87), Tamara Drewe (10), and The Program (15) all screened at the Festival, as did his Academy Award–nominated features My Beautiful Laundrette (85), The Grifters (90), Dirty Pretty Things(02), Mrs. Henderson Presents (05), and Philomena (13). His other films include Dangerous Liaisons (88), The Hi-Lo Country(98), High Fidelity (00), and The Queen (06). Victoria & Abdul(17) is his latest film.

VENICE FILM FESTIVAL | OUT OF COMPETITION