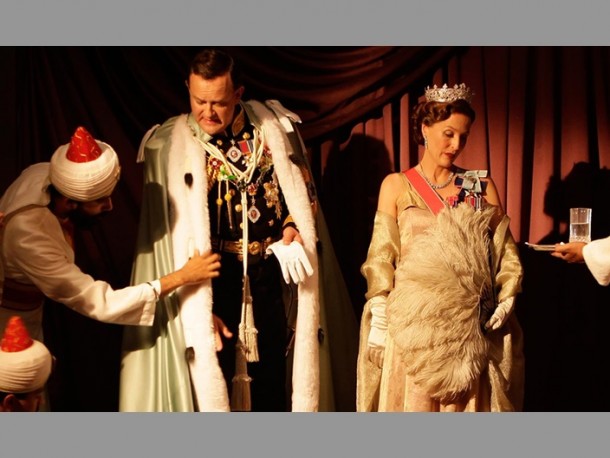 Director/co-writer Gurinder Chadha creates a true epic inspired by her own life story in this magnificent Upstairs Downstairs version of the events leading to the independence of India and Pakistan from British rule in August 1947. Seven years in the making, Viceroy’s House benefits from a tight and imaginatively witty script, as well as stellar performances from an international cast crowned by Hugh Bonneville and Gillian Anderson.

When Earl Mountbatten (Bonneville) and his wife Lady Edwina (Anderson) land in India at the beginning of 1947, their role is clear: they have to give India Independence. The Earl is to be the last Viceroy, who will live in the splendid palace, where the family inhabits the whole upper floor, serviced by a staff of 500 servants on the ground floor. But the situation soon gets out of hand: all over the country Hindus, Muslims and Sikhs are jostling for position in the future independent state, the Muslims under the leadership of Muhammed Ali Jinnah (Smith) hell bent on having their own state, Pakistan. The Hindu leaders Mahatma Gandhi (Kabi) and Jawaharial Nehru (Ghani) are fighting the partition of their country vehemently, finding an ally in the Earl and his wife. Whilst the tension increases, all over the country, violent clashes between the fractions grow into a near civil-war, and Mountbatten has to bring forward the independence date – and submit to the partition he has fought against for so long, “because otherwise, there is nothing to be handed over any more”.

Chadha shows the machinations between the British diplomats: General Hastings Ismail (Gambon), is fighting for the partition (which was planned by Churchill during WWII, who wanted the oil refineries not to fall into the hand of the Hindus, which he regarded as unreliable and left-leading), without telling the Earl about his devious manipulations. Then there is Cyril Radcliffe (Callow) a civil servant who, on his first visit to India, is supposed to draw up the new border between India and Pakistan – on the lines of the Churchill plan – without having set foot in the country before. Huge areas, like the Punjab, where Muslim and Hindus were living in near equal numbers, had to be divided.

On the ‘Downstairs’ level, the ‘forbidden’ love affair between Jeet (Dayal), a Hindu working as a valet for Mountbatten, and the clerk Aalia (Qureshi), daughter of the Muslim politician Rahamnoor (Puri) doesn’t quite ring true. We learn how he was greatly helped by Jeet during his imprisonment, which cost him his eyesight – and this strand serves as a reminder of the personal sacrifices of ordinary citizens. The great strength of Viceroy’s House is in showing how far removed the participants were from the people they pretended to represent. The Earl and his wife, full of good will and decency but naïve in their dealings with politicians, stand no chance as their aristocratic bonhomie is not match for the ‘Real-Politik’ of political advisers, who do not care about status. At the same time, the three leading Indian politicians – Gandhi, Nehru and Jinnah – are much closer to the British establishment than their own citizens. After all, they were all educated at British universities – resistance against, and imprisonment by the British ruling class, with which they shared an upbringing in their formative years – was more like a game of chess in which they tried to outwit their former masters. But they were as detached from the Jeet’s and Aalia’s they to represented as their British counterparts.

DoP Ben Smithard (Belle) is a true heir to Freddie Young, who shot the David Lean treble of Lawrence of Arabia, Doctor Zhivago and Ryan’s Daughter. He often switches to black and white, creating authentic newsreel-look-alike images. The mass scenes of destruction sweeping the country are brilliantly executed. And although the romantic sub-plot is too far-fetched to be plausible, the triumph of Viceroy’s House is its stance denouncing any political class: be they British “stiff upper lip”, or crafty Indian politicians. Despite the rather convenient denouement between Aalia and Jeet, their genuine emotional suffering and upheaval represents the real human trauma behind the statesmen-like façade of political turmoil.