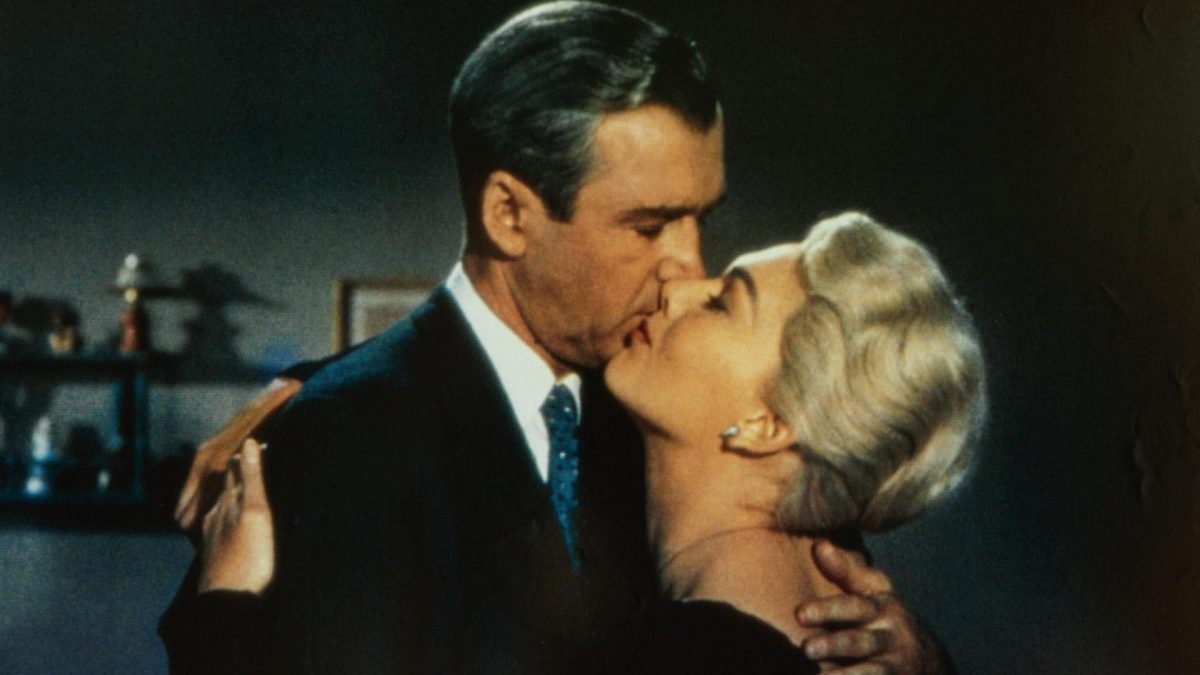 VERTIGO is based on The Living and the Dead by the French duo Pierre Boileau and Thomas Narcejac set in France in the 1940s. Henry-Georges Clouzot had adapted their previous novel for Les Diaboliques, but Hitchcock was unhappy with Alec Coppel’s original script and asked the San Francisco based Samuel Taylor for a re-write.

Filming took place between September and Christmas 1957, the 1958 summer release of Vertigo was either a critical or box-office success – and Francois Truffaut gave it just six pages (out of 300) in his ‘Definitive Study’ Of Hitchcock.

James Stewart plays police officer John ‘Scottie’ Ferguson who is plagued by agoraphobia after an accident that kills a fellow officer. Even his artist girlfriend Midge Wood (del Geddes), cannot seem to get through to him after the tragedy, then an old school, ship owner Gavin Elster (Helmore) asks him to keep an eye on his wife Madeleine (Novak), who is suicidal, and believes she is a re-incarnation of Charlotta Valdes, who committed suicide in 1857 aged 26. Elster reveals to Scottie that, unbeknown to his wife, Madeleine is Charlotta’s great-grand daughter. Scottie starts following Madeleine, and saves her from drowning near the Golden Gate Bridge. The two fall in love, and afterwards drive together to Muir Woods, Cypresse Point and finally the missionary of San Juan Bautista, where Madeleine confesses  love for Scottie, before climbing the steeple whence she falls to her death, Scottie unable to save her due to his phobia.

Scottie becomes clinically depressed and Midge visits him during his confinement but spoils everything painting a garish portrait of herself as Charlotta Valdes; the real painting hanging in the Legion of Honour Museum, which Scottie visits regularly. Despairing, he meets the shop assistant Judy Barton from Salina, Kansas, who is a brunette, but resembles Madeleine, who was a blonde, eerily. Scottie is trying to remake Judy into Madeleine, but stumbles on a deadly secret: Elster has used him, and it was the real Madeleine Elster, who got killed at the missionary. Scottie drags Judy to San Juan Bautista to make her confess, but ends up losing her a second time.

Hitchcock regulars DoP Robert Burks, editor George Tomasini and particularly composer Bernhard Herrmann make Vertigo a standout success and his most mature masterpiece. The director had cast Vera Miles in the leading role, but to his annoyance, she got pregnant. Whilst Kim Novak brilliantly fills her shoes, Hitchcock told her on the first day of shooting that he would not tolerate her “pre-conceived ideas”.

San Francisco provides an eerie backcloth to this alienating drama, deeply Anti-Proustian in its conception, maintaining that memory is free and floods back in every detail. Here Hitchcock sees memory as just a distortion: however hard Scottie tries to re-invent Madeleine, she remains Judy under the glaring green light of an advertising sign. Vertigo is a double murder, both crimes committed by the most tragic of Hitchcock’s heroes. AS

Park Circus is delighted to announce the Presenting Alfred Hitchcock season with an opportunity to explore Alfred Hitchcock’s signature style in the year that Vertigo celebrates its 60th anniversary.

Vertigo will screen in a new 4K restoration at the BFI, Southbank and at cinemas across the UK from 13 July. The film will also be released in international territories.