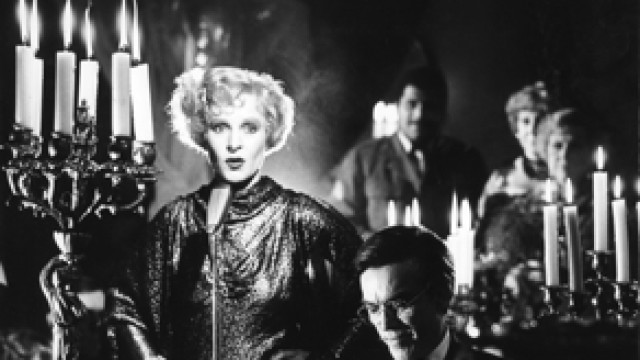 Fassbinder’s penultimate film was also part of his “West German” Trilogy, of which Veronika Voss is the middle part, bookended by Lola and The Marriage of Maria Braun. In these films Fassbinder was critical about the Federal Republic of Gemany: he saw – rightly – that the Nazis were still a force to be reckoned with, particularly in the education of the young, and that the winners – the newly created class of profiteers of the so called “Economic Miracle” – were working hand in hand with them. For the victims of the Nazis there was, literally, no future in post-war Germany.

The sports journalist Robert Krohn (Thate) meets the actress Veronika Voss (Zech) at a tram stop near the Geiselgasteig film studios in Munich. She seems disturbed and disorientated, but Krohn falls in love with her. Voss, had been an UFA star between 1933 and 1945, and is rumoured to have had an affair with Dr. Goebbels. But now, she finds it impossible to get work. Krohn’s wife Henriette, (Froboess) is well aware that Voss has a drug problem and she visits Voss’ psychiatrist, Dr. Katz (Duringer), who exploits her patients by prescribing morphine for exorbitant prices. One of Katz victims is an old Jewish couple (Hofer, Platte), who have survived Treblinka. After they commit suicide, Henriette finds out that Dr. Edel (Schumann), a corrupt health official, is helping Dr. Katz, but before she can talk to her husband she is murdered in a car accident.

DOP Xaver Schwarzenberger plays with light and shadows in his imaginative b/w images: part noir, part a reference to the old UFA films Voss was part of. Fassbinder directs with rare subtlety, the camera gliding along murky streets and ruins – one can still feel the war. Based on the real story of the actress Sybille Schmitz, who committed suicide in 1955 (the year Veronika Voss was set in), the film shows little empathy with  its protagonists – apart from Henriette. Voss is not shown as a victim but, like many Germans, as an opportunist, who enjoyed the good times with Nazis, and was enraged when these times came to an end. Dr. Katz and Dr. Edel are the new ‘winners’: their profit motive is part of the newly introduced capitalism where murder is part of the game. Krohn is seen as naïve and weak, he is no match for Edel and Katz and in the end he is just a bystander, not willing to take on his wife’s killers.

VERONIKA VOSS won the Golden Bear at Berlinale 1982 and Fassbinder commented “Our democracy in the western zones was given to us by the Aliies, we did not fight for it. Old political foes had a chance to fill the vacuum, not openly with the “Swastika”, but more subtlely with the old educational methods of repression. I am astonished how quick this country came to re-arm itself: The revolting youth were rather touching. I also wanted to show, how the 50s formed the people in the 60s  The collision of the new establishment with the engaged fighters [who came from the student movement], led to the latter being pushed into illegality.” AS