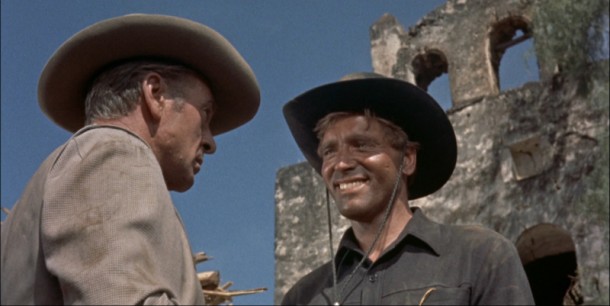 The 1950’s was arguably Robert Aldrich’s most creative decade. He was an angry and forceful director who injected sharp intelligence and dark humour into his work, especially for his United Artist’s projects. Apache, Kiss me Deadly, The Big Knife and Attack all offer remarkable critiques of institutional power. All share with VERA CRUZ a probing sense of cynicism, distrust and betrayal.

VERA CRUZ is atypical of the ’50s fashion for psychological westerns. There is no sense of the brooding guilt or anxiety that appears in the work of say Delmer Davies, Edward Dmytryk or John Ford’s The Searchers. Admittedly VERA CRUZ is a lighter film imbued with its own bristling ‘amoral’ energy (in its day it offended some purists of the more romantic western) and also displays a bitter playfulness that looks strikingly forward to Peckinpah’s The Wild Bunch and the genre deconstructions of Sergio Leone.

Ben Trane (Gary Cooper) and Joe Erin (Burt Lancaster) are two mercenary adventurers in Mexico just after the American Civil War. Mexico (under the rule of Maximilian 1) is threatened by a peasant uprising. Trane and Erin are employed to escort the countess Duvarre (Denise Darcel) to Vera Cruz. They discover that her carriage contains 3 million dollars of hidden gold coins, to pay for fighting troops for Maximilian. So begins a conflict by all parties to steal the gold.

The characters of Trane and Erin are buddies, but a suspicious duo made by accident rather than intension. Trane presents an image of a better educated adventurer who dresses quite plainly. Erin wears a black hat, a black waistcoat, and delights in being coarse of manner. I wonder if it was Lancaster or Aldrich’s idea for Erin to always appear unshaven throughout the film. Burt’s bad guy stubble is in sharp contrast to his pearly white flashing teeth that become a character in their own right. Whenever Lancaster’s mouth gleams malice, Gary Cooper’s remains tight lipped within the integrity of his locked jaw. Such sense of distrust is apparent from the film’s opening when Tran sees that Erin has a horse that he’d like to purchase.

Trane: Howdy. You an American?
Erin: You interested in me or the horses?
(Verbal sparring is always seconds away from one of them wanting to shoot each other.)
Erin: Next time you draw near me, better say what you’re aiming to shoot at.
Trane: If I have the time I will.
(However it’s a rivalry tempered with dubious affection.)
Trane: You just can’t do enough for me, can you Joe?
Erin: Why not? You’re the first friend I ever had.

VERA CRUZ is full of highly quotable dialogue. But putting its barbs to one side, the film also feaures plenty of stirring action. It’s a handsome looking production. Aided by Ernest Laszlo’s photography, the strong music score of Hugo Friedhofer, a hell of a lot of extras playing Mexican rebels (For once no “Hey Gringo” sneers!) and Aldrich driving the story professionally forward. A hugely enjoyable Western to see again and again. Alan Price