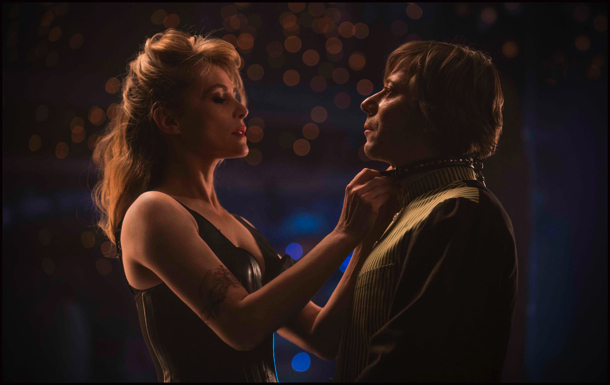 Roman Polanski’s long-awaited VENUS IN FUR, is another New York stage hit to add his successful collection of play adaptations along with CARNAGE and DEATH AND THE MAIDEN.

Emmanuelle Seigner (Vanda) and Mathieu Amalric (Thomas) play the leads in this two-handed chamber piece. And this is not the first time he has cast his wife as a sexually suggestive role in one of his films.  In BITTER MOON, she plays Mimi, the young wife of Peter Coyote’s crippled lothario, Oscar.  Here Vanda is an older but equally seductive and larger than life character who brings passion and delicious wit to this demanding role as an actress who arrives late for her audition for a part in a play. The action takes place in an empty theatre where Thomas, a listless writer and theatre director is exhausted after a day of futile auditions and on the verge of going home, when she finally arrives.

David Ives’ original stage version was based on Leopold von Sacher-Masoch’s 1870 VENUS IN FURS and originally adapted from a book in which the protagonist, Severin, is a sexually submissive man who offers himself as a love slave to a woman who he is obsessed with.  Polanski has collaborated with Ives on this screenplay of this two-handed chamber piece entirely built on the clever dialogue between the actress and writer as she engages every trick in her armoury of seductive techniques to secure an opportunity to read.

Emmanuelle Seigner gives a skilful performance as Vanda, adopting an array of  foxy voices, sexy accoutrements and alluring postures until she convinces Thomas, despite the fact of her initially unsuitability for the role, that she is the embodiment of Vanda.  So persuasive are her acting skills that by the end we are not sure whether she is playing the role or the role within the role. For his part, Amalric offers stalwart resistance to her charms, eventually being overcome by her playful persistence.

This is the first of Polanski’s films shot with digital and regular cinematographer Pawel Edelman successfully manages to give the piece a more open feel to the traditionally claustrophobic ambience of some earlier chamber pieces such as CARNAGE. With Alexandre Desplat’s perfectly-pitched score reflecting the ambience of enigma and intrigue,  this is a really entertaining piece of filmmaking. MT

ON GENERAL RELEASE FROM 30 MAY 2014 NATIONWIDE