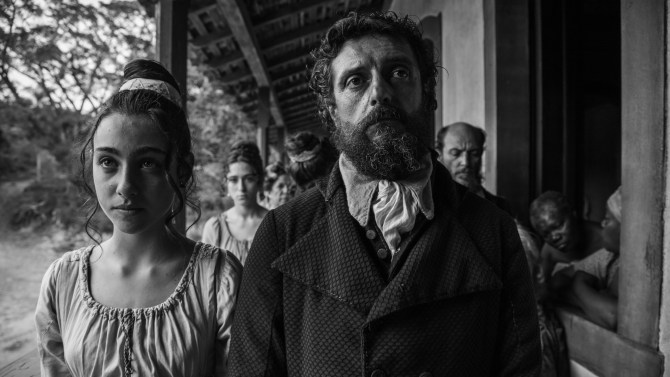 This languorously seductive lush-mounted arthouse piece is the feature debut of Walter Salles’ regular collaborator Brazilian director Daniela Thomas. It explores transitional race and gender relations sixty years before the end of slavery, in 1820s Brazil, with a tantalising drama that focuses on a group of charismatic performances rather than adopting the more traditional approach of highlighting colonial myths.

composed on the widescreen and in intimate close-up in glowing black and white, her gorgeously teasing linear narrative slowly unfolds relying on atmosphere and a series of sparsely dialogued episodes which unspool against the backdrop of the glorious meadows and mountains of the Chapada Diamantina, that runs north and south through Bahia.

Mine owner Antonio has been forced to turn his back on diamond mining and switch to cattle and crops, in a remote estate where he lives with his black slaves and a group of indigenous retainers. Returning home from a trip he discovers his wife has died in childbirth, he decides to marry her pubescent niece Beatriz, who is a feisty tomboy who is unemotionally unprepared for a relationship with a man, and is still playing barefoot in the fields. Preoccupied with survival Antonio makes frequent forays to re-build his fortune and while he’s away, Beatriz is bored and lonely in their large home with only her taciturn grandmother for company with tragic results for all concerned.

Exuding a heady atmosphere of palpable racial tension intensified by its steamy steamy exotic setting VAZANTE is an impressive debut that will entrance cineastes with its gripping plotline, visual allure, feminine perception and captivating acting from a largely unknown cast. In pacing and ambience VAZANTE echoes Embrace of the Serpent. MT