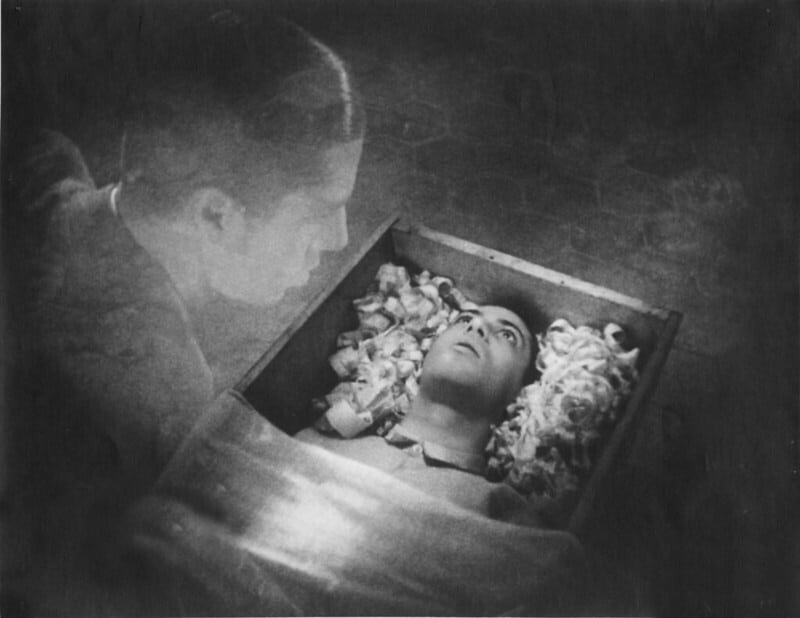 As young traveller Allan Grey, he comes across an old castle in the village of Courtempierre and decides to stay there, entranced by a series of weird and inexplicable events that capture his imagination or is it his imagination?:  A grim figure carrying a scythe, a ghastly landlady who appears at nightfall, shadowy figures flitting across walls, revolving sculls and a nightmare where he is buried alive. Events come to a head when the elderly squire of the village voices his fears for the safety of his young daughters and gives him a strange parcel to be opened after his impending death.  According to local folklore, souls of the unscrupulous haunt the village as vampires, preying upon young people in their endless thirst for blood.

Dreyer evokes an eerie and supernatural beauty to all this as the camera sweeps gracefully across luminously-lit rooms and chiaroscuro passages in the ancient castle. Curiously disembodied shadows counterbalanced by a soundtrack of strange voices, primal screams and periods of unsettling silence add to the feeling of otherwordliness. To create the curious half-light, filming took place during the early hours of misty dawn with a lens black cloth.

The performances are really strong considering the only professional involved was a household servant. Sybille Schmitz as daughter Leone, gives a bloodcurdling series of expressions when she realises her vampire fate ranging from abject fear and misery through to madness and finally menace (see clip). Grey’s burial scene is also eerily evocative as he looks up through wild and staring eyes as the lid is screwed down on his coffin and a candle is lit on the small window above and he is carried through the streets looking up at the drifting clouds and lacy treescapes on the way to his macabre interment.  This is a film that stays to haunt you a long time after the Gothic titles have rolled.  MT