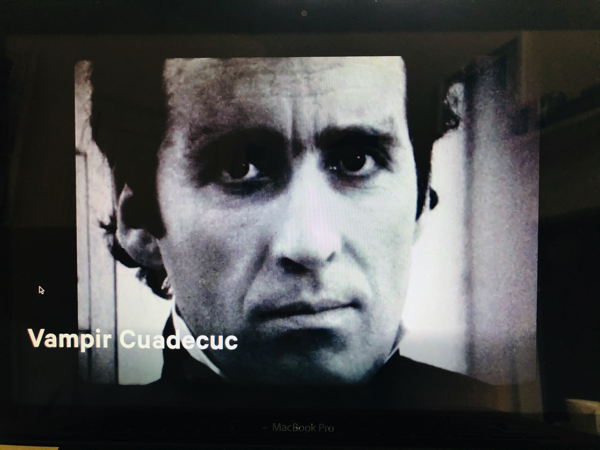 Made in 1970 by the Catalan avant-garde filmmaker Pere Portabella (1929-), Vampir Cuadecuc is a weirdly effective experimental slice of ‘Hammer’ horror that rides on the back of the filming of Jesus Franco’s Count Dracula (El Conde Dracula) that styles Christopher Lee as a grey-haired blood-sucker who is seen rocking sunglasses like some 1970s version of Karl Lagerfeld.

Almost entirely dialogue-free and driven forward by a sinister and occasionally seductively languorous soundscape, the film is curiously watchable, its silent moments as beguiling as the discordant outbursts that threaten to dominate proceedings, even more than Count Dracula himself, who remains and elusive but mesmerising presence throughout. Filmed in lush black and white on a 16 millimetre camera, it almost feels as if Portabella and his crew where lurking in the bushes like a posse of predatory voyeurs. .

Impressionistic and highly suggestive the film swings between deranged docudrama and heightened melodrama, Bram Stoker’s storyline running along the same lines as F W Murnau’s silent classic Nosferatu (1922), but lacking the lyrical romanticism of Werner Herzog’s 1979 Nosferatu the Vampire (1979). The narrative here is fractured by the scenes being played in different sequences and often repeated, but Cuadecuc (which apparently means ‘worm’s tail in Catalan) still retains an hypnotic fascination because we all know the storyline and the vicariousness actually adds allure to the original, Portabella creating a piece of cinema verite. The final scene featuring Christopher Lee is the icing on the cake of this highly original curio. MT