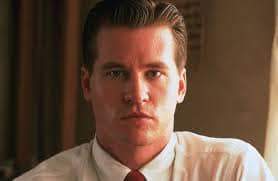 The thing about Val Kilmer is his silly humour. It shines out in this warm biopic of an actor who struck gold commercially but still wants to make it in the arthouse world. Now in his early 60s, a glittering past is behind him, a cancer survivor clinging on cheerfully despite a robotic voice like Stephen Hawking, he still smiles radiantly. A shadow of his former self but his spirit is strong and full of positive energy for the future. And once you get used to the voice you realise he’s much the same as he ever was: just older and wiser – and more philosophical.

In Val, directors Leo Scott and Ting Poo use a hotchpotch of videos and snapshots mostly taken by Kilmer himself: an actor and writer but most of all a big human whose love for life and his family radiates through the 40 years of archive footage in a documentary that takes us from his childhood years in California to the Batman years for which he is most famous, and beyond. His latest project – a tribute to Mark Twain – is still ongoing and clearly fascinates him.

The film starts with him playing around in his trailer with Rick Rossovich during the making of Top Gun, his complex character comes out in another scene where he’s filming John Frankenheimer on the set of The Island of Dr. Moreau. Ordered to stop filming Kilmer carries on regardless. The director had threatened to walk out and so Kilmer bargains with him to stay and the camera continues rolling.

A training at New York’s Juilliard school has clearly instilled a strong sense of quality in his work. And this is probably the root cause of his reputation for being ‘difficult’. He was billed for the main role in the 1983 production of “The Slab Boys,” a Broadway hit play, Sean Penn and Kevin Bacon later pulling rank for the main parts. His creativity went on to be stymied by the commercial system that ultimately offered little by way of freedom to express himself, and this theme sets the tone for an entertaining portrait of a real man, rather than just a jobbing player of parts. This is why his story remains one of success rather than failure, despite the decrepit guy in the picture. Loss is a big theme: his marriage and divorce from Joanne Whalley affected him badly, and obviously the cancer diagnosed in 2015. But he soldiers on making us laugh with an infectious humour in this feelgood movie.

Batman was a personal disaster for him weighed down by a heavy costume and hardly able to breathe, let alone speak. It crushed his performance and he signed out after one go at the Caped Crusader: “every boy wants to be Batman, but not play him”.

The Top Gun episode was a blast with much fooling around off set, sealing his reputation:“For the rest of my life I will be called Iceman by every pilot at every airport I ever go to.” he comments from his Malibu beach hideaway. But he wanted more than fame. Inspiration was really his watchword. In a bid to work with Kubrick and Scorsese he sent them audition tapes but nothing came of it. His force of personality projected him forward for choice roles but he didn’t always get them. Willow was another disaster but the The Doors would be special and he honed his performance again and again, even wearing the leather trousers in an obsession that ultimately cost him his marriage.

Family intervenes throughout the film: particularly his sadness over his brother Wesley who died in a jacuzzi accident in his teens. And his mother was a big influence and he reminisces over her in some tearful sequences. Although his father was a big business man Val ultimately had to bail him out. His faith Christian Science also figures strongly and clearly gives him the strength to pursue his artistic projects. He may have fallen from the pantheon of stardom but seems to have found peace with his kids and a boundless enthusiasm drives him forward to the future. MT