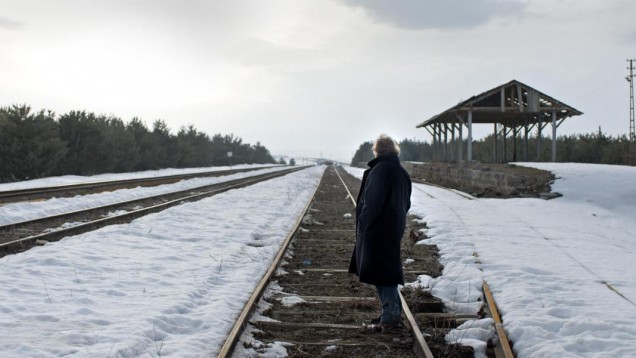 In his third feature Uzak you can sees Ceylan gradually transitioning from the social realist cinema verite style of his early two works to something more like an urban arthouse drama. Spare on dialogue and score, Mozart’s Symphony Concertante (K364) accentuates the feeling of displacement and alienation in this thoughtfully sober two-hander.

At this stage Ceylan is still writing, photographing, editing and producing his own features and this melancholy depiction of loneliness and isolation is set in a dour and wintry Istanbul where Yusuf (Mehmet Emin Topak) fetches up from the country in order to find work on the banks of the Bosphorus. He moves in with Mahmut (Muzaffer Ozdemir) a distant relative and successful photographer whose flat over looks the harbour. Keen on arthouse cinema, particularly Tarkovsky, he enjoys the company of various women friends or hanging out in a jazz-filled local cafe. The contrast between the rough-edged young blade and the louche yet faintly sophisticated older man makes Distant compellingly watchable as the two ruffle each others feathers in a low-key but extremely masculine way. Ceylan’s static camera observes their daily life from a detached point of view: eavesdropping on casual conversations, laconic encounters and familiar comings and goings in the block of flats where they live out an uneventful existence.  .

Mahmut is often pictured in front of the TV, his feet up on a poof, enjoying a film while in the background distant conversations emanate from the concierge downstairs. His wife Nazan has left him and he has grown accustomed to his state of isolation almost relishing it as a badge of honour and with a comforting pride. But he still mourns hiss loss. Meanwhile his mother is forever leaving urgent messages on the ‘phone which he ignores as a matter of course.

Yusuf, on the other hand, is uneasy and restless, out of sync with his newfound urban freedom. He spends his days idly wandering around the locale, trying to meet women in the hope that something will give without much effort on his part, in the style of Dickens’ Mr McCawber. A poignant moment sees him worrying about the suffering of little mouse which Mahmut has tried to poison. The country boy still has a feeling for nature, lost to the man inured to harshness of city life.

Stunningly visual, leisurely and slow-burning but not to the extent of his later films Winter Sleep and The Wild Pear Tree, this is very much a tale from the city that relies on an atmosphere and takes the viewpoint of a detached observer allowing plenty of scope for our imagination to wander and even enjoy the subtle situational humour created by the growing friction between these uneasy flatmates who are clearly both lonely but also loathe to come to any satisfactory modus vivendi. The only moment of real drama is when Mahmut berates Yusuf about not flushing the lavatory. And this leads to a contretemps with the older many suddenly tiring of this young feckless loser who expects to be handed things on a plate, a conversation which highlights Ceylan’s ongoing preoccupation: the contrast between town and country; the old and the new. MT