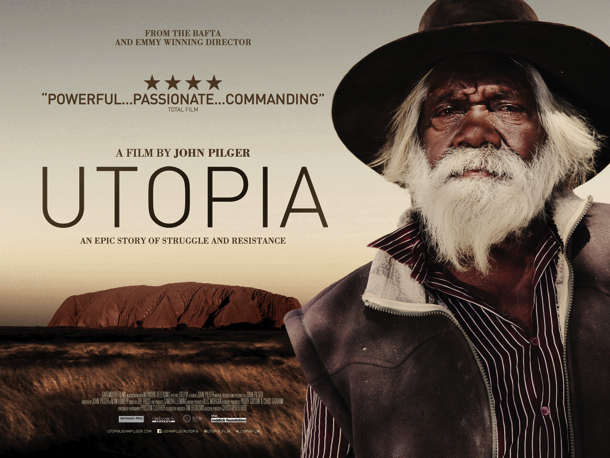 Eighteen years after Lieutenant James Cook had claimed Australia for the Crown in 1870, the British government started to colonise the fifth continent. Since then, Australia has been named the ‘lucky’ country, even though it was first used as a penal colony for misfits from the United Kingdom. But their plight is nothing compared with the fate of the indigenous population, the Aboriginals, of which around one million lived in their own country at the time of the British invasion.

Australian journalist and filmmaker John Pilger, who has worked since 1962 in the UK, has returned to his homeland to see the current plight of the earth loving Aboriginals, who are the victims of an ongoing genocide. UTOPIA takes its name from an aboriginal village of the same name in the Northern Territories, where Pilger’s peripatetic journey begins combining widescreen visuals with close-up interviews of locals and archive footage. We see shacks and other provisional housing, and the house of the government rep, which has no less than 18 ventilators, keeping the heat at bay. These living (?) conditions for Aboriginals are repeated throughout the film: the lack of functioning toilets and other sanitary installations, overcrowding, water pumps outside the buildings, asbestos poisoning, lack of basic health care – the list is endless. No wonder that most of the children suffer from deafness and blindness – they are permanently dehydrated, loosing 30% of their body fluid. A third of the aboriginals die before they reach the age of 45.

The abuse of the Aboriginals by countless governments seems endless and provides a startling contrast to the plush lives of ordinary citizens pictured: Prime Minister Barton stated in 1901 that the equality act would only include the white and British citizen. Sterilisation was another way to reduce the indigenous population, since the white population believed “that they themselves were civilised –but they are not”. In the 60s TV programs proclaimed “that they have to show that they want to be one of us”, and talking about the poverty of the Aboriginals the announcer’s voice proclaimed “That’s what they want”. (‘They’ having replaced the original names of the victims). Thousands of children were literally stolen from parents, and given to white families for ‘integration’. And today’s prisons are overcrowded with victims of the race injustice, the perpetrators speak freely of “stacking and racking” and “warehousing”. 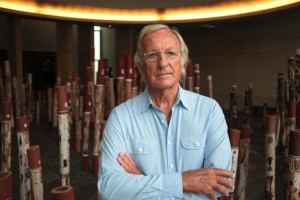 Death in police custody is not a rarity, the case of Eddie Murray, who died in prison in 1987 of a broken sternum is only an exception in so far that he was the son of Arthur Murray, who led a strike of Aboriginal workers in the early 60s, when the conditions were not unlike slave labour. He is rightly convinced that the death of his son was a revenge act. In 2006  the TV show “Lateline”  interviewed a “frightened” youth worker (his face blacked out), who claimed that Aboriginals were using their children as sex slaves. Police action was swift, but it turned out that the “whistleblower” was Greg Andrews, working for the Minister of Indigenous Affairs. This case is particularly ironic, since white men have sexually abused Aboriginal women and children for a century without prosecution.

Perhaps symbolic for the continuous plight of the Aboriginals is Rottnest: a former concentration camp (minus gas chambers) it is today a luxury Spa, costing 240 Australian Dollar per night. The roads are build over the mass graves of the Aboriginal prisoners. Pilger visits Rottness with one of the survivors, who shows us that 51 prisoners lived in the space of one hotel room. The prisoners had to build the gallows for their own people.

Aboriginals are “Refugees in their own country”, and as long as the Australian Government is unwilling to pay any compensation and better their living conditions, it should be treated like the Apartheid regime of South Africa: with economic sanctions.

The “lucky” country? More likely the “lying one”.  This well-paced and immersive documentary is well worth watching both from an historical viewpoint and a cinematic one.  AS

UTOPIA IS ON GENERAL RELEASE ACROSS THE UK FROM FRIDAY, 15TH NOVEMBER 2013