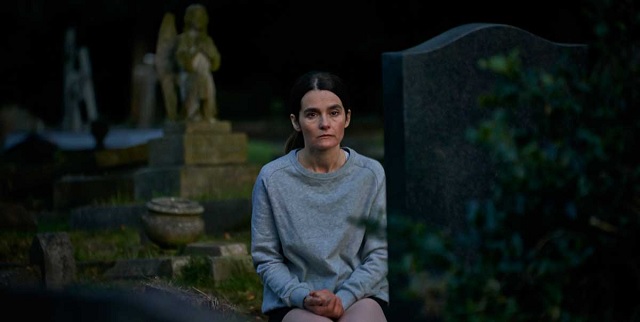 Director Michael Caton-Jones has returned to serious filmmaking after his disastrous Basic Instinct 2 (2006). Urban Hymn has much in common with This Boy’s Life from 1993: in his latest film, the director successfully tries to paint a truthful picture of British society where tragedy strikes when a bereaved middle-class lecturer tries to save a multi-delinquent teenager, orphaned at a young age.

We meet Jamie Harrison (Wright) and Leanne Dixon (Laughland) looting at the Tottenham riots in August 2011, provoked after a black man was shot under suspicious circumstances by the police. Both young women were orphaned at a young age and they live in Alpha House, a correctional institution for delinquent teenagers. Jamie and Leanne have a near symbiotic relationship, they represent to each other the family they never had. But soon, they will be eighteen, and the comparable mild juvenile law will not be applied to them anymore.

When middle aged, ex-sociologist lecturer Kate Linton (Henderson) applies for a job at Alpha House, she is asked by Ian Wilson (Hart), boss of the institution, why she wants to leave the security of the university halls. Her answer is evasive but we soon learn that she recently lost her 13 year-old son Ben, who was knifed to death. Kate has to save somebody, and she chooses Jamie, much more malleable than Leanne, who is the toughie of the couple. Via a neighbourhood choir in which she sings, Kate gives Jamie the chance to be, for the first time in her life, part of something. Leanne tries to sabotage the relationship between Kate and Jamie, fearing – rightfully – that she will lose Jamie, who starts to study at a music academy, falling in love with a fellow student and living in a flat which Kate has procured for her. When Jamie throws Leanne and her drinking, crack-taking friends out of her house, she is unaware what she has set in motion.

The characters are drawn as realistically as possible. Unfortunately, writer Nick Moorcroft too often choses cloying and sentimental turns of events; when a little more detachment would have saved some embarrassment. DoP Denis Crossan captured London authentically, particularly the street scenes at night are impressive: this is a dangerous city, where violence contrasts with the Linton’s middle class environment. The cast is brilliant, particularly Henderson and Laughland, as the polar opposites. Henderson’s Kate is full of guilt and has the need to do good for personal reasons and needs to ‘protect’ Jamie – even against her will. Despite these flaws URBAN HYMN has an emotional impact that carries it forward as a welcome British drama. AS

Bulldog Film Distribution is pleased to announce the UK release of URBAN HYMN, available on DVD and Digital HD from 30 January 2017.