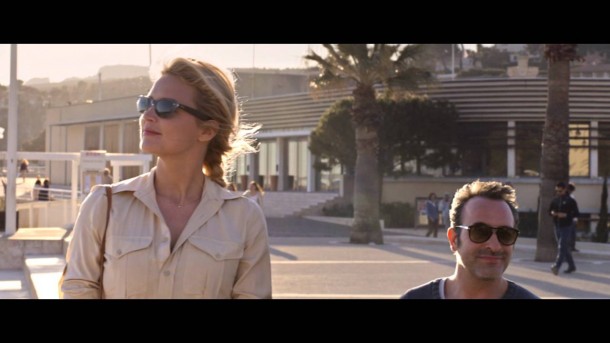 French director’s Laurence Tirard’s straight remake of the Argentinian film Corazon de Leon by writer/director’s Marcos Carnevale (2013), seems to have gained little from its change of location to the Cote d’Azur. The frothy love story between tiny Diane and architect Alexandre, who finds her mobile, is simply too glossy to have an real emotional impact.

Diane (Efira) leaves her ‘phone in a restaurant, after yet another row with her ex-husband Bruno (Kahn) largely sparked by their shared legal practice. Later, a charming voice belonging to Alexandre (Dujardin) invites her to dinner to hand over the phone. Diane is taken back when she sees Alexandre in the flesh and soon forgets her reservations when he invites her to parachute – certainly a novelty for a first date. Meanwhile, at the office, Bruno stills makes life difficult for his ex-wife, sleeping with judges and clients, to help his course. The office secretary Colarie (Papinian) is a sort of referee for the fighting lawyers, changing her support frequently. Alexandre, whose grown-up son Benji (Domboy) lives with him, has a running battle with the indolent femme-de-menage, and a St. Bernard’s dog, who loves nothing more than flattening his beloved master. When Diane introduces her parents to Alexandre, the first cracks appear, and Bruno’s jealousy is not very helpful either. Whilst Alexandre is aiming for full cohabitation, Diane is getting cold feet.

It would have helped had Tirard (Moliere)  chosen less opulent settings: the sun always shines, illuminating the couples’ wealthy dwellings – particularly Alexandre’s, who is a star architect, and always hops over to Liege, where his designs for the rebuilding of the opera house are realised. Apart from the parachuting, he always finds new, exotic pleasures to impress Diane with, whilst showing his more insecure side to his son.

Then there are the speeches, Colarie, in particular, is always ready to launch into one; at one point accusing Diane of being an emotional fascist because she cannot get over the fact that her friends, family and the public will always baulk at the height difference btween the two of them. Needless to say, the resolution is as much over-the-top as the build up. DOP’s Jerome Almeras’ images would be better suited to glossy commercials: the lighting is always perfect, showing off a luxurious environment, where opulence dominates, stifling the protagonists: UP FOR LOVE feels like a competition where Alexandre tries to woe Diane with more and more extravagant surprises, to make up for his missing inches. When Diane tells him he is so special, we cannot recall a single emotional quality: he is just a stage manager, coming up with new sets to impress Diane. As frothy as candyfloss and as sweetly insubstantial.