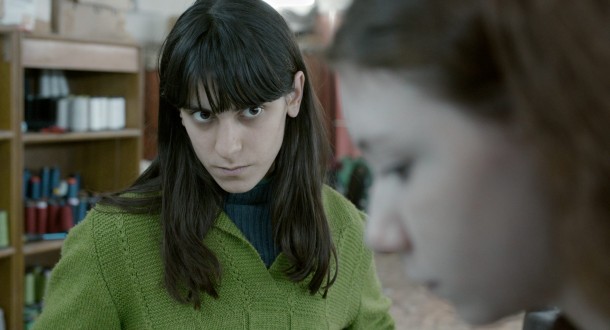 In poor district of Istanbul Emine Emel Balci’s sure-footed feature debut, UNTIL I LOSE MY BREATH, follows a driven young woman, Dardennes-style. Senap (Esme Madra) is holding down a low-paid job in a garment factory, with little support from her friends or sister and brother in law, who only care about her contribution to the rent. Clearly Serap, is no fool and planning for better things; saving every Lira she can to pay for an apartment she’s hoping to share with her dad, Musatafa (Riza Akin), who has little regard for his youngest daughter, having already abandoned her as a child. Serap is quite keen on Yusuf (Ugur Uzunel), one of the factory delivery boys who often drives by to shoot the breeze with his mates and Seraps’s co-worker Dilber (Gizem Denizci), under the watchful glare of their draconian boss Sultan (Sema Kecik).

There’s nothing particularly new about this well-crafted and watchable tale of modern Turkey that shows our heroine as a diligent worker who is serious and emotionally unreachable in view of the negative experience that life has dealt her thus far. What emerges is a society where women compete with each other, desperate to escape to a better life abroad. We learn that Musatafa is a traditional male who is looking to a plaint female to take care of him, until the next one comes along.

One briefly joyful scene stands out – where Senap goes on a fairground rollercoaster but ends up vomiting into a waste bin: its almost as if women here are destined not to have any pleasure without pain in a place which is distinguishable only by its dismal streets, sunless skies and over-bearing disreputable males, seen through Murat Tuncel melancholy visuals.

Esme Madra’s debut turn as Serap shows promise as an actor who could well bloom and flourish in other more ambitious roles. MT