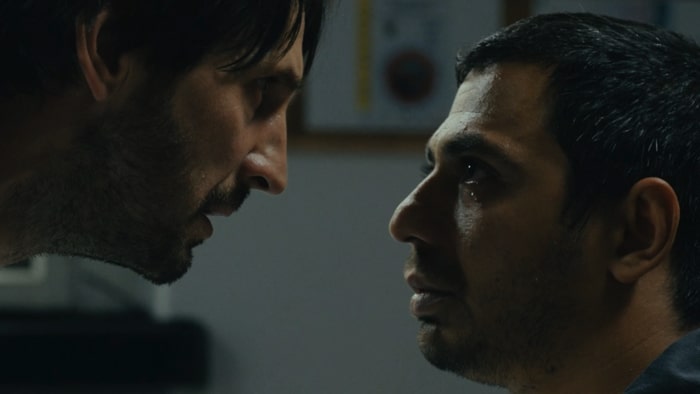 Very much in the style of the classic French crime thrillers of the 1970s, Unidentified is a modern version of Yves Boisset’s Un Condé, tackling  racism and misogyny in one fell swoop in a tightly plotted murder story. Unidentified is the sophomore feature of Romanian director Bogdan George Apetri who also wrote and edited and co-produced drawing from his experiences of working in New York.

It sees scuzzy minor Detective Florin (Farcas) down on his luck, and in need of a scape goat to his appease his boss, Commissar Sef (Muraru). The sacrificial lamb soon fetches up in the shape of Roma security guard Banel (Domitru) whose been unlucky enough to have two major disasters occur during his checkered career, both seemingly connected to insurance fraud with Banel aiding and abetting the perpetrator, the owner of hotel where he was working.

Not that Florin is is squeaky clean from the personal probity angle either. Behind with his car repayments and mortgage, and he badgers his friend Mircea (Aradits) to give him more time to pay off his debts. But money worries are not the only thing getting the obsessed detective down. In Oleg Mutu’s fluid widescreen camerawork, we watch him on a hillside, overlooking a hotel and parking lot, spying on his fiancée Stela (Popescu) who is cheating on him with a married man. It’s hardly surprising given the way Florin neglects her and always seems to be in a bad mood. But what the hell? He hatches an ingenious plan to get rid of both of them in a double murder – the perfect crime. It will involve getting to know Banel and organising for him to work in the hotel where Stela hangs out. It’s got to be meticulously planned, so it looks like an accident: He invites Banel to his home, and makes him touch a beer bottle, which he will later use as a Molotov cocktail to kill Stela. So off he goes to meet Banel in the parking lot of the hotel at nine pm. But in that classic but always effective dramatic device – things don’t go according to plan for Florin. Not during the crime but afterwards, when his boss Sef picks holes in his story.

Apetri is certainly a master storyteller, overlaying his story of detective obsession with the serene score of none other than Chopin’s delicate piano music. Helicopter shots show Florin driving around manically, chasing his prey on a murderous mission. Even at two hours plus, Unidentified keeps us in its grip in exploring a psychotic law enforcement officer, crumbling before our eyes. And apparently there’s more to look forward too, Apetri’s  feature is the first of a trilogy set in small town Romania. AS