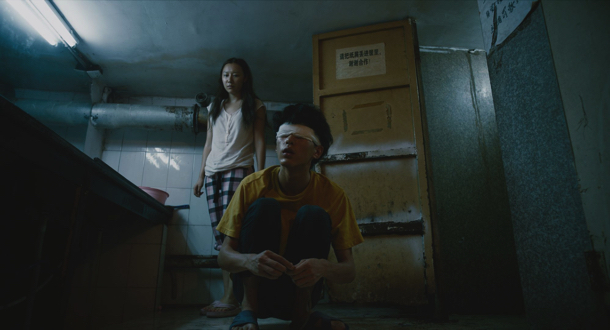 Stray Dogs co-collaborator FengPei Song returns to Venice with his directorial debut UNDERGROUND FRAGRANCE which tells another delicately rendered story this time of young love that blossoms amongst the ruins of Beijing’s property boom.

Yong Le, a young migrant worker from the south, works salvaging furniture from abandoned houses to re-sell.  He lives in cramped conditions in Beijing’s Underground City, a labyrinthian former bomb shelter that serves as cheap housing for people looking for opportunities in the big city. But after a bad work accident leaves him temporarily blind, he has to use a rope to find his way around the dimly lit basement halls, until one night when he meets a girl at the other end of his rope. Xiao Yun, is a migrant too. A night-worker in a pole-dancing venue, she is desperately trying to find a more suitable work when a tentative relationship develops between her and Yong Lee, encouraging  her to hunt for a more respectable job. At ground level, Lao Jin has been struggling with his wife for 8 years to get a decent compensation deal from the authorities who want to demolish his house. His health is declining and his savings are evaporating. Desperate to move on, he’s counting on Yong Le to sell his furniture at a good price. These stories intermingle in the meltdown generated by the  the “Chinese Dream” when Southern country-dwellers who thronged to the Beijing metropolis during the last decade’s property boom.

Suffused with melancholy and broken dreams this is an enchanting urban story with convincingly sombre performances from its talented cast of largely newcomers. Often crowding people or machinery into his vibrantly-coloured static long takes FengPei generates a feeling of claustrophobia that echoes desperate emotional alienation and loneliness rather than oppression and there are sharp some bursts of humour: at one point Lao Jin sets off fireworks in the trees outside his house in an attempt to silence nesting owls. Nostalgia for the past and the longing for country life and traditional values are reflected in some tender scenes involving attachment to animals and religious customs and Jean-Christophe Onno’s atmospheric original score adds a lilting romantic feel throughout this charming debut.

PENGFEI (Beijing, 1982) was born into a family of Peking Opera performers in Beijing. Under the influence of his family, he developed a strong passion for the arts. He went to Paris to study film at Institute International de l’Image et du Son and majored in film directing. After seven years of living in Europe, he returned to China to work on this debut. He worked as Tsai Ming Liang’s a.d. for Face in 2009, The Diary of a Young Boy, and the short Walker in 2012. Pengfei raised finance for UNDERGROUND FRAGRANCE – through various sources including the Cannes’ Atelier in 2012, the Production Award from TorinoFilmLab in 2011, and the Sundance Screenwriters Lab Cinereach Award in 2012. MT