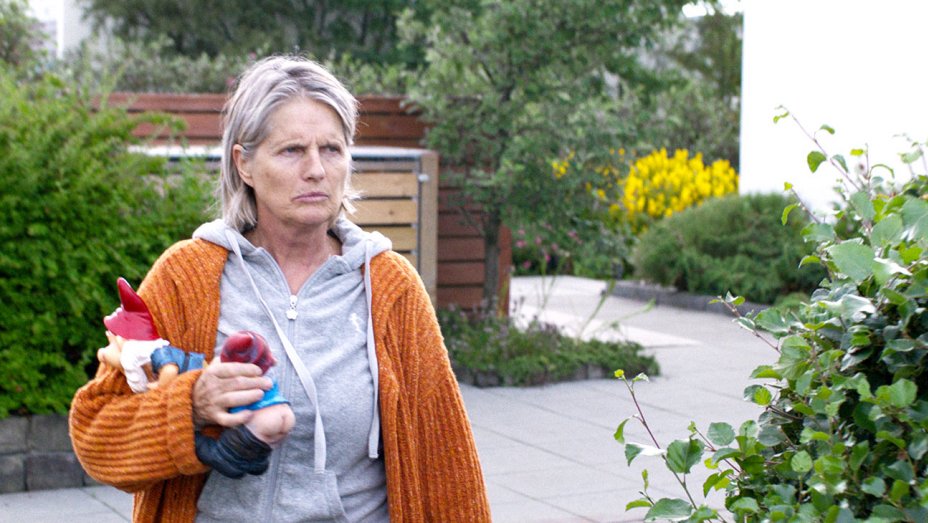 In this urban satire, Hafstein Gunnar Sigurdsson (Rams) pulls off a comedy feat: he makes us laugh at our own petty mindedness that can at any moment send us hurtling into a cataclysmic abyss. A great ensemble showcases this a tour-de-force of middle-class nimby-ism with the same dark humour as Rams.

It all starts with a male embarrassment: husband Atli (Steinporsson) is surprised by his wife Agnes (Jonsdottir) in the early morning, masturbating to pornographic images on his laptop featuring him and and – or so he claims. Agnes throws him out, not knowing that his next place of residence back with his parents – will soon be a war zone. After the loss of Atli’s brother, who is heading for suicide, his mother Inga (Bjorgvinsdottir) has been suffering from depression, and has chosen the next-door neighbours Konrad (Bachman) and Eybjorg (Bjornsdottir), as an object for her deflected self-hatred. Konrad and Eyborg, not unreasonably, want the huge tree on his parents’ property trimmed, at it blocks the sun from their front porch. Whilst Inga’s husband Baldvin (Sigurjonsson) is ready to compromise, Inga herself does not want to sacrifice a leaf – she craves war, to release her pent-up emotions. After Atli moves in, living in a tent in the garden, his parent Persian cat disappears without a trace and Inga is convinced the neighbours have abducted her. Since said neighbours own a proud German shepherd, Inga takes matters in her own hand: impersonating Eybjorg at the vets, she has the animal put to sleep and, after taxidermy, puts it at the front door of the hatred neighbours. When husband Baldvin criticises her action as over the top she tells him “at least they know where he is, unlike me” – referring to the missing body of her son. When Konrad, in the middle of the night, takes his saw to the titular tree, he sets in motion a bloody Shakespearean tragedy.

Violence simmers under the suface: Atli cannot stand the thought of Agnes getting custody of their four-year old daughter Asa: who he abducts from Kindergarten and later smashes his wife’s mobile after harassing her at her workplace. But unlike his mother, Atli is too phlegmatic to escalate the conflict, listening to his father’s compromise solutions – but one can see a family resemblance. Though the director never forgets to show us the funny side: at a tenants’ meeting in Agnes’ flat, she complains about Atli being there, blurting out at the meeting “Atli masturbates to the images of his girlfriend. That’s not alright, isn’t it?”, to which the male half of a couple, whose nightly, noisy lovemaking keeps the neighbours awake, responds with a curt “why not, it’s okay”.

Under the Tree is full of dialogue chock-full of witty one-liners as startling as they are absurd: but underneath there lurks a nimbyism and an intolerance of anyone who is not perceived as showing their own values. By the end, Sigurdsson, fed up with  humans, leaves the last ‘meow’ to the cat. AS