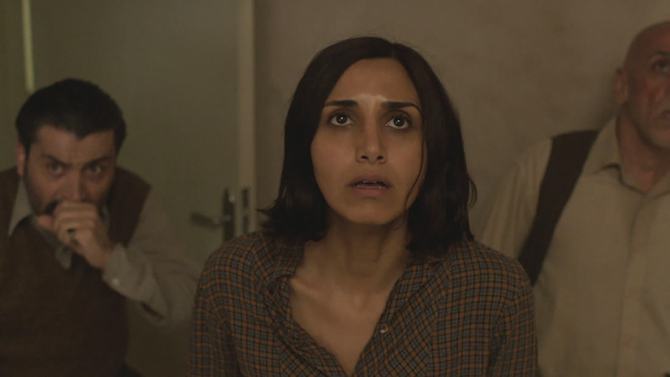 Writer filmmaker Babak Anvari grew up in Tehran in the 1980s, before moving to the UK. His debut is this harrowing portrait of family life during the last phase of the Iraq/Iran war in 1988 using elements of the horror genre to show the effects of war and the Islamic Revolution on the mind of an emancipated mother during the bombing raids in Tehran.

We first meet university administrator Shideh (Rashid) after she has been expelled from the medical faculty for her left-wing activities after the Islamic takeover of 1979. She had hoped to be re-instated, but the stern bureaucrat rejects her application, asking her to look for another goal in life. Her doctor husband Iraj (Naderi), who has stayed out of politics tells her “it may be all for the best”. He later further undermines her skills as a mother to daughter Dorsa (Manshadi) and claims that she only wants to be a doctor because it was her late mother’s dream – to which Shideh caustically replies “the dead don’t dream”. Stuck at home all day, she spends her time dancing to a Jane Fonda video and listening to the BBC.

As the bombardment of Tehran intensifies, the family are forced into the cellar of the apartment block with their neighbours. Iraj is called up to do his annual medical service; this time in a district near the front of the fighting and advises Shideh to leave the city and live with his parents in the countryside, but she refuses. When a (dud) bomb hits the apartment above Shideh’s flat, cracks appear in the ceiling, and Dorsa puts it down to evil spirits of ‘djinn’. Shideh laughs this off at first but soon jump scares, violent sound effects and moving objects frighten her out of the house. In wild panic, she is caught on the street by police who arrest her for not wearing a hijab: “A woman should fear nothing as much as being exposed” she is told, and gets lucky, with only one night in jail. But when Dorsa’s favourite doll disappears, the tone darkens further. With all the neighbours having moved out, Shideh must make a decision.

Under the Shadow is an inversion of A Girl walks home alone at Night: this time the female main protagonist is not in charge, but is invaded by external manifestations provoked by emotional turmoil. Shideh is isolated and abandoned by her husband, in more than one way, and has no friends to turn to. Whilst the djinn – medieval spirits – do not exist, Shideh and her daughter need an explanation for their plight, and the terror of the bombings drives her into a fantasy world of terror. Under the Shadow uses symbols and metaphors to create a specific feminist horror scenario. DoP Kit Fraser turns living rooms, hallways and staircases into nightmare alleys, the lighting is expressionist and evocative. Narges Rashid is brilliant in this tour-de-force of emotions, and her interactions with Manshadi’s Dorsa are near telepathic. Babak Anvari has created something of a contradiction: a meaningful horror film. AS

OUT ON GENERAL RELEASE from 30 SEPTEMBER 2016