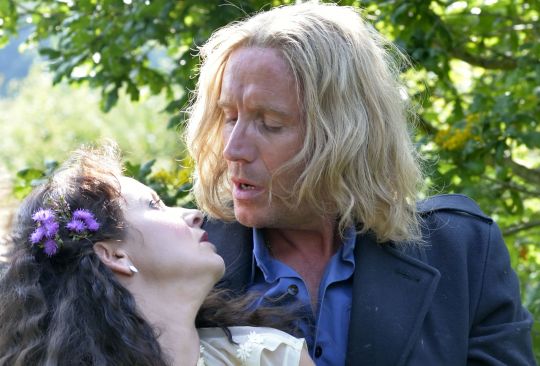 When highly-coloured bits of plastic detritus bob along a fake sea bed in the opening titles to UNDER MILK WOOD you start to wonder if you’ve slipped into a screening of a Tellytubbies feature length drama. But the lilting Welsh voiceover is unmistakably the powerfully potent 1954 ‘play for voices’ by Dylan Thomas.

Kevin Allen’s ultimately pointless screen adaptation is a ghastly twee romp through a Welsh village. It is also the UK’s Foreign Language hopeful at the 2016 Academy Awards. And to top it all, it stars Charlotte Church (as the buxom Polly Garter). The whole point of this gorgeous play is to listen and imagine it, ringing out in richly evocative tones, as the lushness of its sumptuous imagery gradually unfolds in the subconscious to evoke a whimsical Welsh wonderland.

Take a paltry budget (hence the plastic) and some largely unknown actors (doing their best but cast simply through being Welsh) and you have a second rate production bristling with picture postcard lewdness that totally downgrades and denigrates one of Britain’s most wonderful and highly-regarded 20th century plays. What was Kevin Allen (Twin Town) thinking of?

The saving grace here is naturally the narration by Rhys Ifans, who can always carry a production with his exuberance and style. Starring as Captain Cat, one of the characters who dwells in the coastal village of Llareggub on whose musings the piece is based, he brings the drama to life with his sparky enthusiasm.