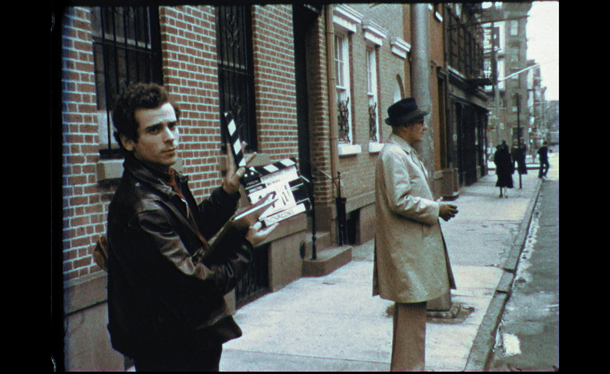 Filmmaker Aaron Brookner (The Silver Goat) has not only rescued his uncle’s Howard most famous documentary Burroughs: The Movie (1983), but also created a moving portrait of the late director, who died of Aids in 1989, just 34 years old.

UNCLE HOWARD is not just a trip down memory lane or a hagiography shown through poignant home movies of Aaron and Howard, it is very much a research document, however loving. To start with, it took quite a while to get to “Burroughs Bunker”, at 222 Bowery in New York, a windowless flat in New York, where the late writer and provocateur worked until his death in 1997, when the place was taken over by his friend, the poet John Giorno. He was reluctant to allow Aaron access to the archive, which included positive and negatives of the Burroughs film. But finally, with the help of Jim Jarmush – co-producer of Uncle Howard and sound technician on the Burroughs film – Aaron rescued the film from oblivion. What Aaron found, was not only the documentary itself, but also shots of its making. Apart from Burroughs and Ginsberg, many of the ‘underground’ artists of the New York scene can be seen in action: Frank Zappa and Andy Warhol amongst them, as well as filmmaker Tom DiCillo, Howard Brookner’s DoP, and director and actor Sara Driver, one of the co-producers of UNCLE HOWARD. Interviews with the theatre director Robert Wilson, subject of Howard’s second documentary Robert Wilson and the Civil Wars (1987), shed further light on Howard Brookner’s working method. When Howard was negotiating with Columbia about the contract for his first feature film Bloodhounds of Broadway with Madonna and Matt Dillon, one of the studio executives remembers, that the director mentioned this could be his first and only film – not taking this literally. But Howard died in April 1989, before the premiere of Bloodhounds.

UNCLE HOWARD visits favourite artist haunts such as the Chelsea Hotel, and the St. Vincent hospital in New York – “the Ground Zero” for New York’s Aids victims of the Eighties and Nineties – which today is a luxury apartment block. DoPs Gregg De Domenico and Andre Döbert thoughtfully select styles to show how much the city has changed – for the better, and how much it has lost in the last 25 years. UNCLE HOWARD is a Trauerarbeit, but also a celebration of the life and work of Howard Brookner.