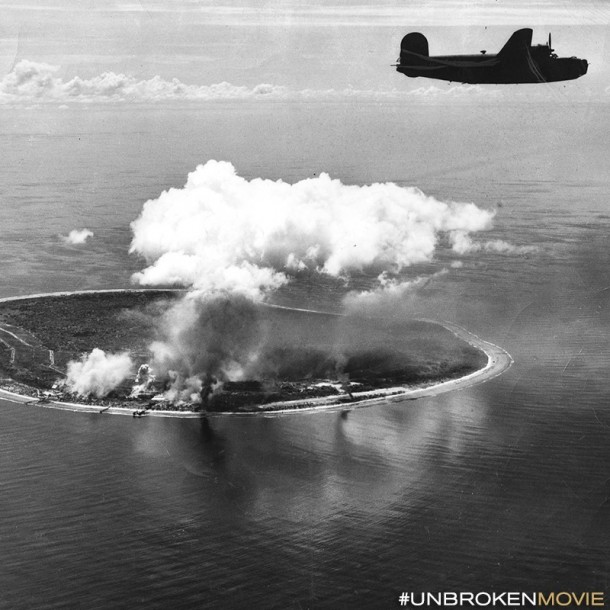 After Land of Blood and Honey Angelina Jolie chooses another war theme for her second film as a director: UNBROKEN is the biopic of Louie Zamperini, US long distance runner and celebrated survivor of a Japanese prison camp. In choosing war and sport, the two predominant interests in the American way of life, Jolie secures a wide audience together with her populist approach, assuring the title moderate box office success (at least in the country of origin).

The action opens in WWII when Zamperini (Jack O’Connell) is part of a bomber crew over Japan. Their first outing is succeeds by the skin of its teeth but on their next mission they have to crash-land in the ocean. Apart from Zamperini, only Phil (Gleeson) and Mac (Wittrock) survive. They have to tackle sharks, storms and hunger – in a pool, that has ‘studio’ written all over it . Before they are picked up by a Japanese vessel, we learn in flashbacks some of Zamperini’s life story: a youthful delinquent, he was told by his brothers to toe the line; they showed him how to put his unrest into a career as a long distance runner. He excelled and was on the US team for the Berlin Olympics in 1936, finishing third in the 5000 m race, but running the fastest last lap. This fame seems to work against him in the prison camp, where the commander Takamasha Ishihara (Miyavi), singles Zamperini out to degrade him in front of his fellow prisoners. Since we knew that our hero would live to be 97, little suspense is created.

To read in the end credits that Joel and Ethan Coen have co-scripted this overlong patriotic vehicle, seems absurd. UNBROKEN is the anti-Coen brothers film. Told at a snake’s pace, with lumbering action scenes and sentimental childhood memories of an America long gone (if it ever existed in the first place), this is aesthetically a throw back to Ben Hur, with which it shares some of the religious undertones. Jolie relies on her PD department (and the budget) to save anything worthwhile. Ideologies apart, this is one of the worst hagiographies in film history: every question asked is answered with the most simplistic solution. Jolie leads us back into a time, where men were simply good or bad (no prize for guessing which side wins in UNBROKEN), and their athletic prowess was the only criterion to be considered. In this context, the main leads succeed admirably, and the camera tries its best to recreate the best moments from past films. UNBROKEN is like a stodgy, overcooked and tasteless Christmas dinner and will be served to you ‘warmed through’ from Boxing Day. AS

ON GENERAL RELEASE FROM BOXING DAY