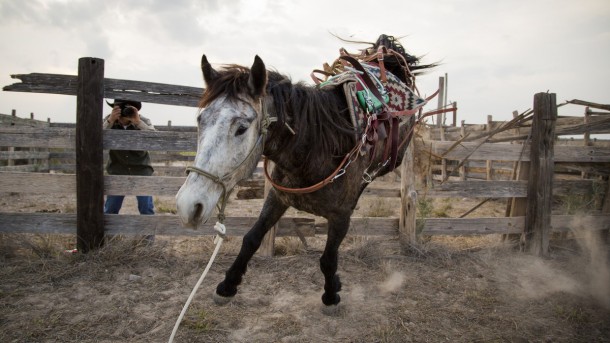 Best described as a Western Documentary Phillip Paribeau’s UNBRANDED sees four young wannabe cowboys, fresh from college, follow their dream on a wild adventure along a 3,ooo mile backbone of the Mexico borders to Canada.

Their chosen method of transport is by mustang, just a folksy word for the wild horses (that were originally imported into the country 500 years ago by Spanish conquistadores) and whose cause the boys are promoting: Over 50,000 of the beasts are looking for adoptuion in holding facilities. Since 1971, the horses have been protected on the land and there is controversary as to whether they are over-breeding – as rangers claim, or are under threat. But under the AML guidelines (Appropriate Management Levels), the territory can only support 23,000 mustangs and there are currently over twice that amount, 60% are in Nevada alone, and therefore their existance is potentially untenable, aacording to so,e. Fortunately, the horses’ cause has been considerably enhanced by the doc winning the Audience Award at Hots Docs in Toronto.

Audiences may find the idea of a rites of passage journey exhilarating but occasionally the boys complain of boredom and resort to reading on horseback during their journey, ironically ‘Shades of Grey’ is the book of choice for one man – casting considerable doubt on his abilities to meditate and ruminate on greater things in this magnificent countryside of Utah, Montana, Oregon

Ben Masters leads the five month expedition through some of the most glorious scenery known to mankind and Dp  camerawork is simply stunning to behold offering unbridled footage of national parks such as the Yellowstone and the Glacier. But the major challenge comes from the mustangs themselves who are fiercely wild and independent and, most of the time, an unknown quantity offering plenty of dramatic tension in this entetaining and informative film, scored by a Sergio Leone style original soundtrack. But for those looking for fast-moving action sequences there may be some longeurs: this is more about quiet meditation and being at one with nature.

The story kicks up briefly for some 4th of July celebrations including a tradional rodeo and cut throats shaves all round for the boys, in Jackson. But Ben claims to be “glad to get out of there”  as they continue their journey. Donkeys join the group but there are also losses on the mustang front and eventually the trip proves tiring as food supplies start to offer poor variety on the nourishment front. “No matter how beautiful a country is, at some point it becomes a test of endurance,” and this particularly the problem when the troop have to take the long way round, in the case of private ground. And arguments break out as the tensions start to surface. But Ben Masters’ endeavour is ultimately about promoting the horses fight for survival so that every man and beast can successfully share the natural beauty and ressources of this spectacular part of the world.

ON GENERAL RELEASE FROM 27 NOVEMBER 2015