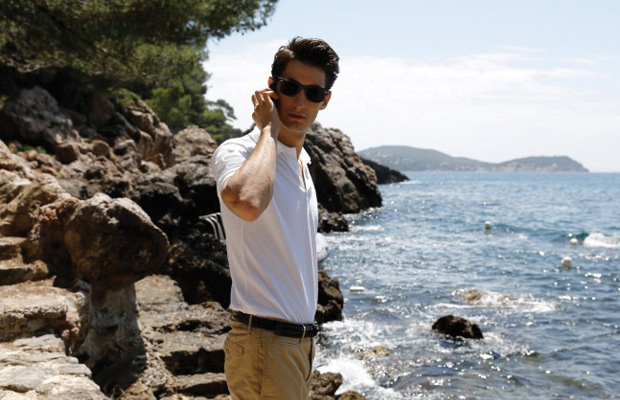 with the feel of Hitchcock and Chabrol (remember that scene in Le Boucher when blood drips through the celling?). Yann Goslan’s terrically tense thriller is a delicious treat sumptuously set in the summer heat of a villa in Var. It stars Pierre Niney as a struggling writer, driven to extremes by his desire to produce a decent novel., or at least any novel at all.

Mathieu Vasseur (Niney) first manuscript, The Man From Behind, has been rejected by publishers. Working parttime as a cleaner in the local College near his Parisian bedsit, Vasseur stumbles into a lecture being given by a young woman, Alice (Ana Girardot), on the topic of scent and memory. When he’s hired to clear out the home of a dead man who has no living relatives, Vasseur finds a leather bound tome recounting the man’s experiences in the Algerian war. Vasseur has the brainwave to pass this off as his own work, and before he can say Highsmith, he’s written his perfect ‘debut’ novel.  Soon he’s mixing in the same circles as Alice and when the pair become engaged, they head off to her parent’s gorgeous Villa near Dijon, armed with an advance to work on his second novel.

But Vasseur is somewhat of a slacker And his publisher is breathing down his neck for a few sentences. Meanwhile a friend of the original author also gets in touch and not just for a chat over a cafe creme – he also means business and tries to blackmail Vasseur.  then One of Alice’s exes, Stanislas (Thibault Vincon), arrives at the villa and senses the  the edgy tension in Vasseur.

Niney is perfect as the highly-strung, feline Vasseur, in this follow-up to his role as Yves Saint Laurent. With his sensitive masculinity he makes Vasseur a compelling character both sensual and vulnerable and his chemistry with Ana Girardot is perfectly believable. Vasseur’s nerves of steel make him similar to the famed Mr. Ripley character of Patricia Highsmith, novel.  Gozlan’s crafts a portrait of an intellectual con man who allows his desperation for success to go against his better judgement. Sadly the background of the Algerian war is hardly mentioned and could have provided a rich counterpoint to the narrative that descends into blackmail and eventually murder and a really tragic denouement.

Still, the absolutely brilliant noirish score by Cyrille Aufort (A Royal Affair) and Antoine Roch’s gorgeous cinematography make this a gripping and watchable thriller  for a Saturday night at the movies – or any other night of this week for that matter. MT

ON RELEASE FROM 20 NOVEMBER 2015 COURTESY OF STUDIO CANAL