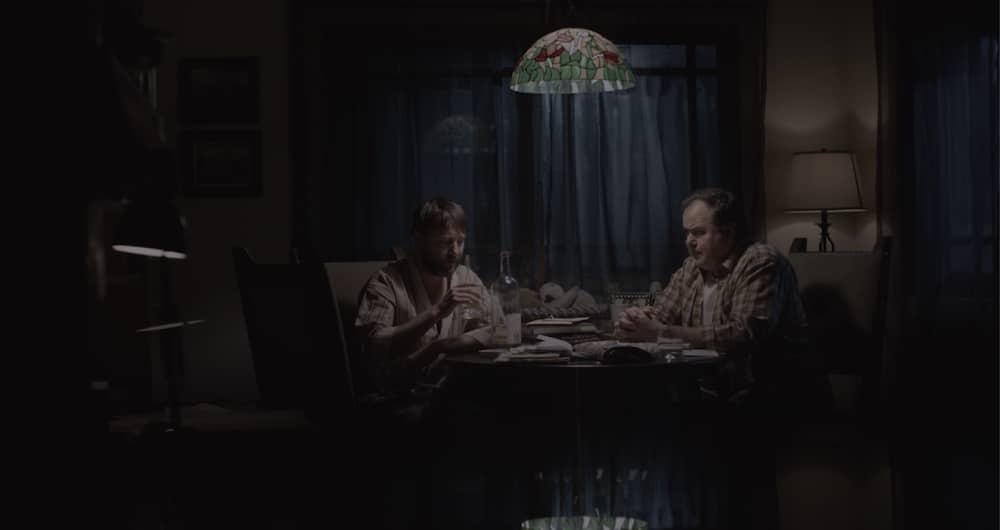 Ultrasound is a curio: a visually stunning sci-fi psychodrama that often feels like several films rolled into one, a loose storyline connecting its diverse narrative strands and characters.

It seems the protagonists are as confused as we are, taking part in a  bizarre experiment masterminded by one Dr Conners (Adebimpe). There is a dreaminess here suggestive of Shane Carruth’s Upstream Color. But this desire to be inventive doesn’t necessarily make for a satisfying conclusion, although some may be intrigued by the hypnotic weirdness of it all.

Starting off straightforwardly, Glen (Kartheiser) breaks down in a rainy remote backwater after his tires puncture on a bunch of nails. Shaken and disorientated by the collision, Glen finds refuge from the elements in the home of a welcoming couple – the rather too friendly Cyndi (Lopez) and Arthur (Stephenson) who even suggests Glen stays the night in the master bedroom with his wife. Reluctantly Glen agrees to the arrangement, out of politeness rather than any sexual frisson between him and Cyndi. At some point later Arthur appears on Glen’s doorstep with the news that Cyndi is pregnant. Soon Glen and Cyndi are the bewildered central couple but whether Cyndi is actually ‘with child’ is up for grabs.

Elsewhere, and in a seemingly different film, Katie (Rainey Qualley) is in thrall to her older businessman boyfriend who works all hours while she waits for him in needy isolation. Shannon (Wool), meanwhile, is a research assistant running a human experiment while trying to unravel a subversive plot within the medical establishment where she works for the sinister boss Dr Conners.

Schroeder employs an exotic electronic soundscape to drive his mysterious vehicle forward, but at times it seems to spin out of control, not unlike Glen’s car, although ‘the science’ is the reason for the mayhem rather than nails. Certainly Ultrasound has some interesting ideas and a distinct visual flair but that doesn’t mean it makes sense as a cohesive fantasy drama. MT