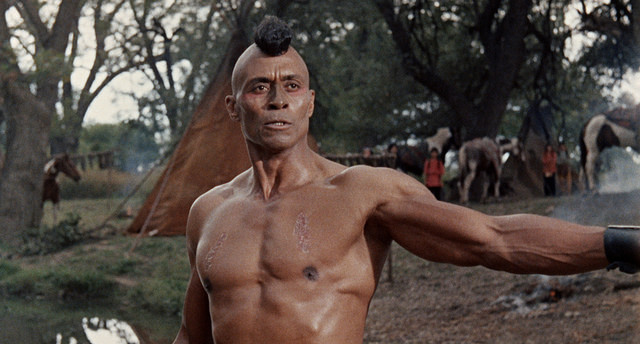 John Ford’s sagebrush Western stars James Stewart as a fierce but practical marshal who sets out with Richard Widmark’s hard-bitten cavalry officer to rescue and repatriate pioneer children captured a decade previously by the Comanche Indians. The straight-talking film pits ‘Cowboys’, Indians and Mexicans together in an 1880s frontier debacle that is a pale rider in comparison to Ford’s previous outing The Searchers (1956) but important in highlighting a little known period of American history, although the thrust of the narrative is more about the psychological impact on the captives rather than on their discovery and ‘liberation’. Based on the novel by Will Cook, and adapted for the screen by Frank S Nugent, TWO RODE TOGETHER shows how the original families miss their loved ones, whereas the captives have experienced ‘Stockholm syndrome’ and adapted to their new lives despite the hardships involved – particularly for the women. Re-integration proves problematic particularly for a beautiful Mexican woman, Elena de la Madriaga, played by Linda Cristal (best remembered for her role in High Chaparral) who is faced with discrimination and hostility on her return to the White community.

There are some pithy exchanges between Widmark and Stewart, and his lover Belle Aragon gives as good as she gets: “How many times do I have to tell you that I don’t want to even look at a man before five.” There is also much to enjoy in Charles Lawton Jr’s widescreen photography although some of the scenes feel a little too stagey. No classic, but well worth a watch for its storyline and central performances. MT