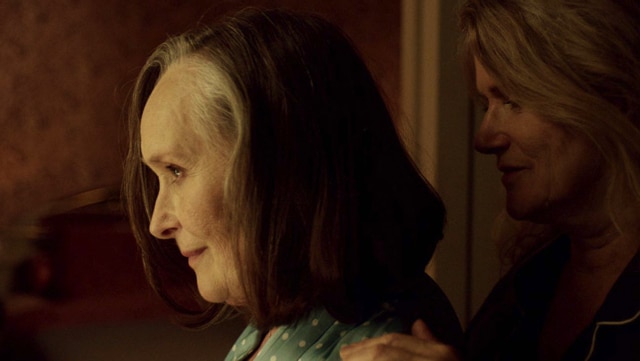 Filippo Meneghetti’s first film tells an unusual love story, somewhere between realism and fairy tale. Nina and Madeleine are neighbours in a small town in the Moselle region of France. But the ladies have been lovers for decades although coming out will be problem, particularly for Madeleine (Mado), whose children Anne (Drucker) and Frederique (Varanfrain) are self-righteous conformists.

German émigré Nina (Sukowa) is the driving force in the relationship: she is keen for Mado to sell her flat and move to Rome. But Mado is only too aware of divorced hairdresser Anne’s feelings, and her son is a misogynist at the best of times, and takes her property off the market angering Nina.  But things deteriorate even further when Mado suffers a stroke and is rendered speechless and immobile needing a full time carer in the shape of Muriel (Benazaref), who is quietly possessive of her new charge. Although Anne tries to take over but love eventually finds a way – via Bingo of all things.

Beautifully crafted and sensitively performed Two of Us is a worthwhile and unique lesbian love story that joins films such as in in showing that Love and emotional intimacy is so important at any age and this mature love affair feels fresh and authentic despite its bourgeois provincial setting that gives the drama its glorious settings.

Although the script suffers inexperience plot development wise, veering between fairy-tale comedy and a dramatic critique of Mado’s blinkered children who stay in the way of the elderly couples’ happiness, this is an intelligent film pointing out how small town values are not necessarily ageist ones. That an un-offensive couple like Nina and Mado should live in fear of being ostracised for being lesbians is very dernier siecle – particularly since it would stay in the family, a family Mado would love to leave despite her visceral connection to her children. There is much to enjoy and admire here, but a much clearer approach on genre identification would have been welcome. AS