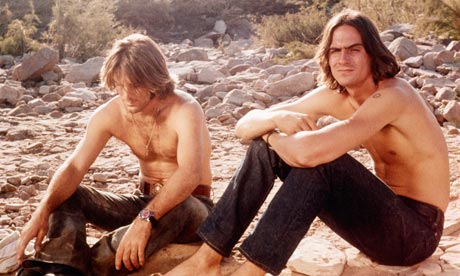 Of the four leads in Monte Hellman’s cult classic road movie TWO-LANE BLACKTOP, sadly only one remains, the sing-songwriter James Taylor. Hellman too survives and although his offbeat and entertaining masterpiece was revered by the critics – winning two major awards for Warren Oates in his supporting role as a maverick lone-motorist GTO, and making Hellman an everlasting cult director – it was a flop at the box office.

The road movie genre had only just come into existence in the early 70s and BLACKTOP centres on a pair of loon-wearing hippies, musicians Dennis Wilson (The Mechanic) and Taylor (The Driver), who challenge Oates to a driving contest across America’s south-western states. The musicians are classic petrol-heads in their custom Chevrolet and dapper Walter Mitty character Oates drives a yellow GTO Pontiac, doling out a different diatribe to each quirky hick-hiker he meets along the way. One is played by Harry Dean Stanton, a homosexual cowboy who places his hand on GTO’s knee during the drive and gets short shrift in return: “I’m not into that!, This is competition man, I’ve got no time”.  A voluble, tousled-hair teenager in the shape of Laurie Bird (‘The Girl’) hitches a lift with the Chevrolet. She sleeps with Wilson ‘s Mechanic on the first night and later flirts with the other two before leaving them all to their own devices on the back of another traveller’s motorbike.

BLACKTOP is wittily co-scripted with a string one-liners by Rudy Wurlitzer (who also gets a small part) and Will Corry from his own story, referencing the fear surrounding the Zodiac serial killings in the area during the late 60s, early 70s:”You guys aren’t like the Zodiac killers or anything, right?” And although Dennis Wilson was one of the Beach Boys, the soundtrack, “Moonlight Drive” was written and performed by The Doors. MT