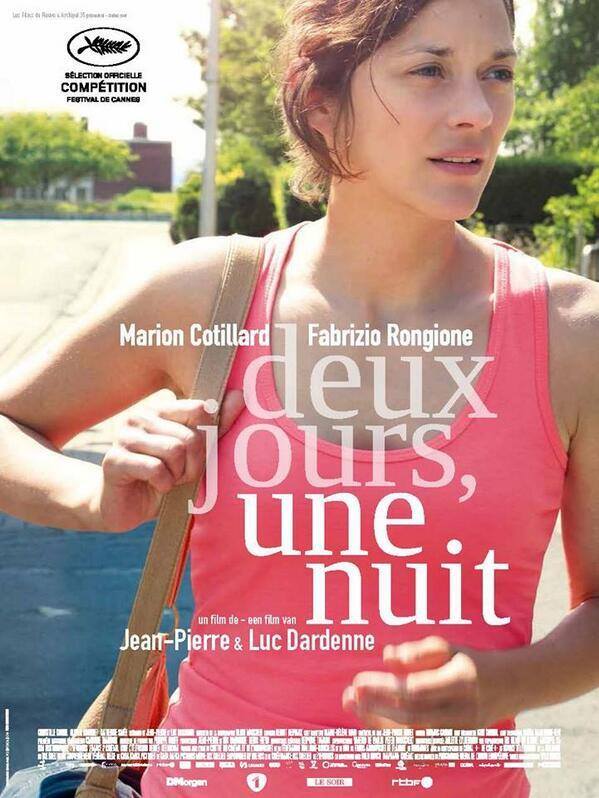 The Dardennes brothers began their filmmaking activities in the late seventies and have hugged the limelight at Cannes since their Palme d’Or win with Rosetta in 1999. Success continued with wins at Cannes for Le Fils in 2002, L’Enfant in 2005, Le Silence de Lorna in 2008 and Le Gamin au Velo in 2001 but this year they were not so lucky with Two Days, One Night.

It stars Marion Cotillard as Sandra, who has been off work with depression. When she returns to her workplace in small company producing solar panels, Dumont, the owner, gives his staff an ultimatum: they can either get their 1000 Euro bonus, with the result that Sandra will be sacked (since the foreman Jean-Marc has decided that the production line can work without her), or they sacrifice their bonus and Sandra can keep her job. Apart from two close friends of Sandra, the fourteen others vote for their bonus. Since Jean-Marc has wrongly informed the workers, that one of them will be sacked, if they vote for Sandra to keep her job, Dumont gives Sandra a last chance: she has the weekend to convince the majority of her co-workers to change their mind for the new ballot on Monday morning.

Sandra is anything but a heroine: she pops her anti-depressants like candy, permanently attacks her supportive husband Manu (Rongione), oscillating between self-pity and passive-aggressive behaviour, she is often her worst enemy. The Dardenne brothers show that victims of society, like Sandra (and her colleges) are not nice, simpering waifs who suffer in resplendent silence, but show their hurt in an unpleasant, sometimes obnoxious way. But there is a reason: Sandra and Manu know that without Sandra’s salary, they will fall down the social ladder unable to pay their mortgage, and have to go back to social housing. A fate they would like to avoid, particularly for their two young children.

In spite of herself, Sandra gets through to some of her co-workers on her weekend odyssey around the local houses, where every encounter is a small story in itself: one worker breaks down in tears, ashamed of himself that he voted for his bonus, even though Sandra had saved his job in the past. Another starts a violent fight with a college, who is open to Sandra’s argument and a wife leaves her abusive husband, because he wants to use the bonus money for a patio. A Black worker is equally afraid of God and his foreman at work, suffering from his dithering. But in the end they are all put in this position by the management: the choice they have to make is inhuman and nobody should be made to make an inhuman choice, according to Jean-Luc and Pierre Dardenne.

Even though this is the first time that the brothers have worked with a real star, a brilliant Cotillard, they have spurned a Hollywood like happy-end. Instead we get another measured, sober but not at all depressing solution. Apart from Cotillard, the camera (who follows her every subtle emotional nuance) is as always the ‘star’ of a Dardenne film: un-intrusive, non-judgmental but chronicling nevertheless every detail. Somehow the directors avoid repetitiveness and the Belgian hinterland is not shown as an uniform downtrodden landscape of no-hopers, but a vibrant place of struggle. TWO DAYS, ONE NIGHT is a hopeful, against-the-odds message, like the hero in De Sica’s Umberto D, Sandra often stumbles, but always regains her dignity to go another step further. AS