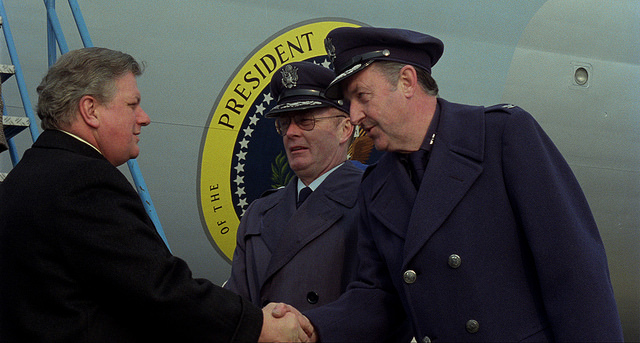 TWILIGHT’S LAST GLEAMING sees director Robert Aldrich (Kiss me Deadly, The Dirty Dozen) at his most uncompromising: this post Vietnam epic, based on “Viper 3” by Walter Wager, treats a government cover-up with utter cynicism, leaving nothing to the imagination. Considering all the recent revelations – not only about the US government – this is a very contemporary topic.

General Lawrence Dell (Lancaster) has escaped with three other convicts from an US military prison, and has gained control of a missile base in Montana, where he now commands nine nuclear warheads, targeting the USSR. He wants ten million USD from the government and safe conduct to a country of his choice. But most of all he requires a TV disclosure by President Stevens (Durning), reading out a secret protocol by the last administration, which admits to the Vietnam War being just a PR stunt, to show the Russians that the USA would go to war – even though the Vietnam War, costing the lives of a million Vietnamese and 50 000 US soldiers – was unwinnable from the beginning.

Secretary of State Renfrew (Cotton) and Defence Secretary Zachariah Guthrie (Douglas) as well as the rest of the cabinet, do not want the secret text to be made public – they would rather sacrifice Stevens, who allows himself to be held hostage by Dell; with the latter’s arch-enemy, General MacKenzie (Widmark) in charge of the sharp shooters, covering Dell, Stevens and one of the surviving escapees on their way out of the silo to Air Force One, where the cabinet is waiting.

Using split screens to enhance the action, Aldrich achieves a thrilling finale, in which the protagonists are clearly divided: Dell and Stevens the innocent idealist, the cabinet standing by, hiding their betrayal behind unmoving masks. Particularly Douglas’ pipe smoking Defence Secretary is very menacing; Douglas being a dead ringer for former CIA boss Allen Dulles, who is rumoured to have played a very active part in the assassination of John F. Kennedy. Aldrich achieves a good balance between action and cabinet discussions, even though the epic length is somewhat mystifying. Performance-wise, Douglas and Lancaster are outstanding, only topped by the brilliant paranoid General played by Widmark. DoP Robert Hauser (Panic in Echo Park) convinces equally with his images of the confined White House scenes and the daring plots and counter plots around the missile silo. Aldrich leaves no doubt about any ones intentions, Twilight’s Last Gleaming (quoting a line from the National Anthem of the USA) is a brilliant suspense thriller about the amorality of power. AS

Eureka’s Masters of Cinema Dual Format release of TWILIGHT’S LAST GLEAMING to be released on 31 October 2016.