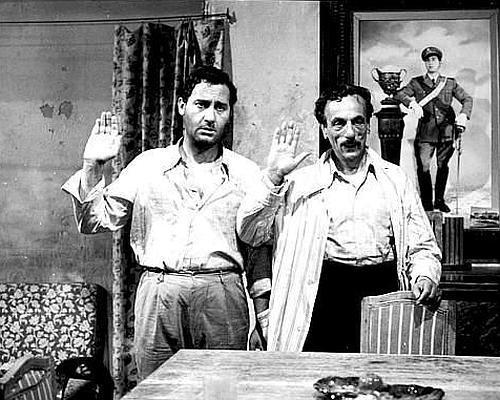 Luigi Comencini (1916-2007) was an Italian director mainly known for his successful comedies like Till Marriage Do Us Part (1975). And Tutti a Casa, restored for the centenary of his birth seems to start off in a lighthearted manner. But soon, the narrative takes a very serious turn, when Lieutenant Innoncenzi (Sordi) and his men try to return home, instead of joning the German soldiers on 8th of September 1943, Armistice Day as Italy surrenders to the Allies Forces, but is thwarted by German troops, who kept on fighting,

The Germans start killing their former allies, if they do not fight on with them, and bring the war to the civilian population, who they suspect to hide partisans. One by one, Innocenzi’s man are slaughtered by the Germans: helping a Jewish girl to escape; hiding an American soldier and being shot in crossfire; doing slave labour for the Germans. Finally, Innocenzi is left alone, and is ready to fight with the partisans, firing the first shots in anger of the film.

Comencini here addresses certain taboos in Italy, where post-war history saw the country only as victims of the Nazis, never as their collaborators. But Tutti a Casa is anything but a war film, it is a humane portrait of pacifists who do not want fight on either side, but just want to return to their families. Italians were unable to see the moral dilemma of Italy becoming the accomplices of Nazi ideology after four years of war,- even if it was just by silent consent. Tutti a Casa is a humanist masterpiece, directed by a master craftsman. AS